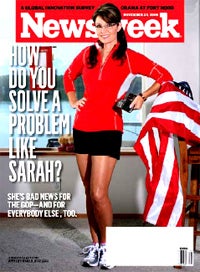 The suddenly ubiquitous Sarah Palin is on the cover of Newsweek this week. But she didn’t pose for the cover photo – it’s from a shoot the former Alaskan governor and vice presidential candidate did for Runner’s World.

Here’s what Palin said, via Facebook, about the cover:

"The choice of photo for the cover of this week’s Newsweek is unfortunate. When it comes to Sarah Palin, this "news" magazine has relished focusing on the irrelevant rather than the relevant. The Runner’s World magazine one-page profile for which this photo was taken was all about health and fitness – a subject to which I am devoted and which is critically important to this nation. The out-of-context Newsweek approach is sexist and oh-so-expected by now. If anyone can learn anything from it: it shows why you shouldn’t judge a book by its cover, gender, or color of skin. The media will do anything to draw attention – even if out of context."

She also addressed it on Tuesday’s “Good Morning America,” calling it a “wee bit degrading.”

This isn’t the first time Team Palin has had a problem with a Newsweek cover. You’ll recall this one, during the campaign, which was criticized for not airbrushing Palin’s blemishes.

UPDATE: Jon Meacham, Newsweek’s editor, responded Tuesday: "We chose the most interesting image available to us to illustrate the theme of the cover, which is what we always try to do. We apply the same test to photographs of any public figure, male or female: does the image convey what we are saying? That is a gender-neutral standard."