Updating Friday: Here's a bit of context, and I will continue to update this post as I report out the story.

Why do we care about this memo? It's exactly the kind of thing that never gets revealed in Hollywood. While there's plenty of gossip and speculation about who makes how much at the talent agencies, these are all privately-owned companies, and these numbers never become public. (This still doesn't answer the question of who would want this released, and why; clearly there's an agenda to embarrass somebody.)

This is not the  case with the media moguls – we've published a major piece earlier this year about salaries at the top of the studios – which are in the $20 million range for the likes of Bob Iger, Peter Chernin and Les Moonves. (See Hollywood Execs Rake It In Despite Recession.)

But the agencies are notoriously private – maniacally so in the case of CAA, for example — about how much their stars get paid, much less what their own agents get paid. This is just basic business sense. Actors should never be clued in to the fact that their agents – who service them – make a whole helluva lot more money than they do.

And now there's even more pressure: How will major actors getting hosed on their fees in a time of cutbacks feel about the fact that agents are making $6 million and $7 million a year?

I'm guessing that more than a few of William Morris clients are scrutinizing this memo, and thinking about whether their representatives are worth what they're paid.

The ripples from this have not begun to be felt. More in a bit…

Who knows why John Fogelman, until about a minute ago the co-head of William Morris’ motion-picture department, chose yesterday to fax the memo written by CFO Irv Weintraub, containing the personal salaries and stock apportioning of WMA top agents, executives and board members from 2007?

And who knows why someone passed it along to TheWrap?

But it’s indisputably fascinating, especially in light of the merger with Endeavor and the dumping of dozens of Morris agents in the past few weeks, as discussed here at WaxWord yesterday. (Mark Itkin was already noted. But come on — Rena Ronson? What?)

The stock options are very interesting.

But it’s the cash rewards to the top earners at the agency that shed little-seen light on the inner doings of Hollywood's agency world. And the implications to the merger are tantalizing. (See the full document here.)

Is it possible that Itkin was cut out of the board of the new entity, WME, because his take-home compensation is somewhere around $4.5 million? (Even though he was bringing in $10 million in fees two years ago?) 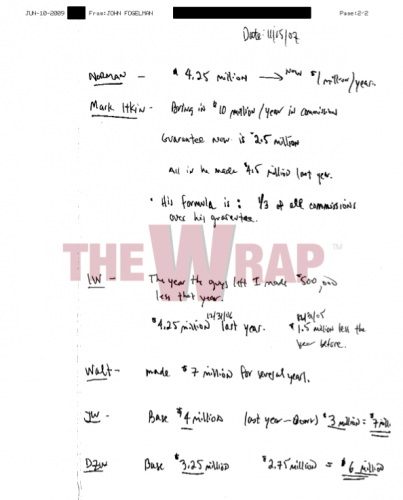 The document appears to have been written by CFO Irv Weintraub, who writes of himself: “The year the guys left I made $500,000 less that year.” Wow. So the CFO was making $4.25 million in 2006. That’s a lot of bean-counting. (I really should have paid more attention in math. That was less than he made the year before, 2005.)

See below for a guide to the initials in the chart.

What were they making at Endeavor in those years, one wonders?

I look forward to the knowledgeable commenters on this document, who will help explain it.

Meanwhile, here's who's who on the lists: