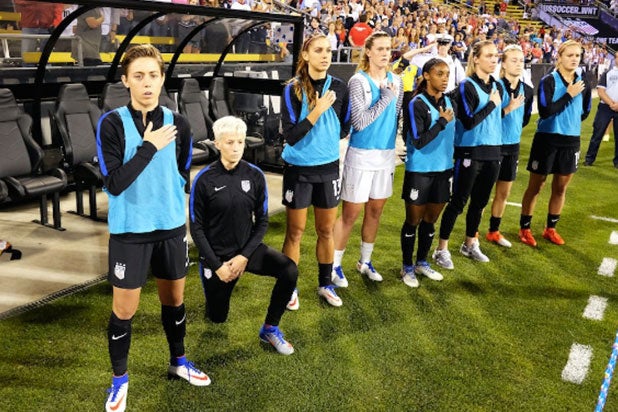 Megan Rapinoe of the American women’s soccer team took a knee during the national anthem on Thursday, following the lead of Colin Kaepernick and other NFL players protesting racial inequality.

According to the New York Times, the stakes are higher with Rapinoe kneeling, given that she is representing the nation while the other protestors were part of professional or school teams.

In an interview after the game against Thailand in Columbus, Ohio, Rapinoe said, “Ultimately, I just went with what’s in my heart.”

“I truly feel like I am representing my country by doing this, in representing everyone that lives in this country, not just the people who look like me,” she added.

U.S. Soccer has not announced any disciplinary action, but doesn’t sound happy about it, either.

“Representing your country is a privilege and honor for any player or coach that is associated with U.S. Soccer’s National Teams,” the organization said in a statement. “Therefore, our national anthem has particular significance for U.S. Soccer. In front of national and often global audiences, the playing of our national anthem is an opportunity for our Men’s and Women’s National Team players and coaches to reflect upon the liberties and freedom we all appreciate in this country. As part of the privilege to represent your country, we have an expectation that our players and coaches will stand and honor our flag while the national anthem is played.”

Rapinoe also took a knee earlier this month during a game in Illinois to support Kaepernick.

“It was a little nod to Kaepernick and everything that he’s standing for right now,” Rapinoe had said. “I think it’s actually pretty disgusting the way he was treated and the way that a lot of the media has covered it and made it about something that it absolutely isn’t.”

The San Francisco 49ers quarterback is famously protesting the national anthem by not standing up during performances of “The Star-Spangled Banner” out of refusal to “show pride in a flag for a country that oppresses black people.” Several NFL players have followed Kaepernick’s lead, including prominent members of the Miami Dolphins.

Kansas City Chiefs cornerback Marcus Peters raised his fist, along with Martellus Bennett and Devin McCourty of the New England Patriots, and Jurrell Casey, Wesley Woodyard and Jason McCourty of the Tennessee Titans. The Seattle Seahawks joined arms as a team in a sign of unity.

Since his protest, the response has been polarizing. Charlie Sheen, Spike Lee and President Obama have expressed support, and Kaepernick’s jersey sales have skyrocketed. However, stars like Kate Upton and Rob Lowe have criticized the athlete’s actions, the former stating that sitting or kneeling down during the national anthem is “a disgrace to those people who have served and currently serve our country.”