Footage of Conan O'Brien's visit to Turner headquarters in Atlanta has made its way online.

The late-night host stopped by Turner after the final date on his live comedy tour. Conan left his gig at NBC's "Tonight Show" in January. He will be hosting a new show on Turner-owned TBS in November.

Youtuber jnf1222 posted two clips showing the former "Tonight Show" host arriving at Turner's Techwood campus on Monday. shortly before 11 a.m. local time. Several of the buildings at the Turner complex were decorated with banners in honor of the network's new star including one that said, "TBS Welcomes Conan."

Turner employees gathered outside to meet Conan, who rolled up in a pair of black SUVs. Many of the Turner staffers carried pro-Conan signs and wore white T-shirts bearing the slogan "Coco Is With TBS," a play on the "I'm With Coco" memorabilia that became popular among Conan fans during his dispute with NBC. 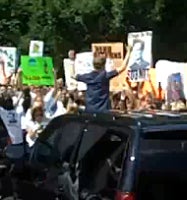 Conan emerged from his mini-motorcade to booming applause. He waved at the crowd before giving a short speech.

Conan's remarks began with a thank-you to the crowd for standing outside in the sun to welcome him. Atlanta has been dealing with a heat wave this week, with temperatures about 10 degrees over normal averages for early summer.

"What idiot decided to have this event outside in this heat? At NBC this event would have been inside and air-conditioned," O'Brien joked.

After his short greeting to the staff, Conan headed inside where he hosted an hourlong question and answer session that ended with him getting groped by a female Turner employee.

Watch both videos of Conan's arrival at Turner HQ below: