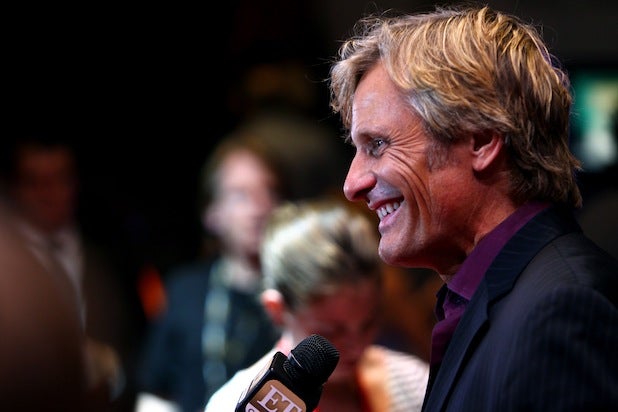 Several actors appeared in more than one movie at this year’s Toronto International Film Festival: Keira Knightley in “The Imitation Game” and “Laggies,” Mark Ruffalo in “Foxcatcher” and “Infinitely Polar Bear,” Simon Pegg in “Kill Me Three Times” and “Horace and the Search for Happiness,” Patricia Clarkson in “October Gale” and “Learning to Drive” and Kristen Stewart in “Still Alice” and “Sils Maria,” among others.

But Viggo Mortensen holds the unusual distinction of having two TIFF movies in which he speaks four different languages … none of which are English, the language that moviegoers are accustomed to hearing Mortensen speak.

The 55-year-old Mortensen, born in New York to an American mother and a Danish father, speaks both Danish and Spanish in “Jauja,” a beautiful and forbidding art film from Argentinian director Lisandro Alonso, and French (with an Algerian accent) and Arabic in “Far From Men,” a David Oelhoffen Western of sorts set during the Algerian war for independence.

Mortensen, who calls himself “a restless person,” has also spoken Russian, Swedish, German and Lakota onscreen in other films — plus, of course, the bit of Elvish he speaks in the three “Lord of the Rings” movies.

“Jauja,” which premiered in Toronto on Wednesday after debuting in May at Cannes, features the actor as a European officer who ends up wandering through the South American desert looking for his daughter, who may have run off with her boyfriend. His journey gets stranger and more mystical as it progresses, and so does the film — though to be fair, it starts out pretty strange and mystical, too.

The film is largely wordless and entirely arty, composed in the nearly square 4:3 aspect ratio and so determinedly slow-paced that viewers can either be mesmerized or bored stiff, or both at the same time. As a cinematic artifact, it’s fascinating — and while it has more of a story than some of Alonso’s past films, its commercial prospects would appear to be minimal.

His other TIFF entry, “Far From Men,” which premiered on Tuesday, is bigger and a little more mainstream. Set in Algeria during the early days of that country’s war for independence from the French, it features Mortensen as the Algerian-born son of immigrants from the Andalusian region of Spain.

“To the French, I’m an Arab,” he explains at one point. “To the Algerians, I’m a foreigner.”

As a schoolteacher and World War II vet who reluctantly agrees to take an Algerian prisoner through the rebel-infested mountains to a town where the prisoner will no doubt be executed, Mortensen speaks Algerian-accented French throughout the film, except for a few conversations in Arabic.

Loosely-based on the Camus short story “The Guest,” “Far From Men” is a quietly gripping character study of a good man caught in bad times with nothing but bad options; it’s also an effective suspense tale, with the likelihood of success always in doubt and no tidy resolutions in sight.

With Mortensen’s 2014 movie “Everybody Has a Plan” filmed entirely in Spanish, the two new films mean that three of the actor’s last four films have been in languages other than English. Only the upcoming “Two Faces of January” is an English-language production.