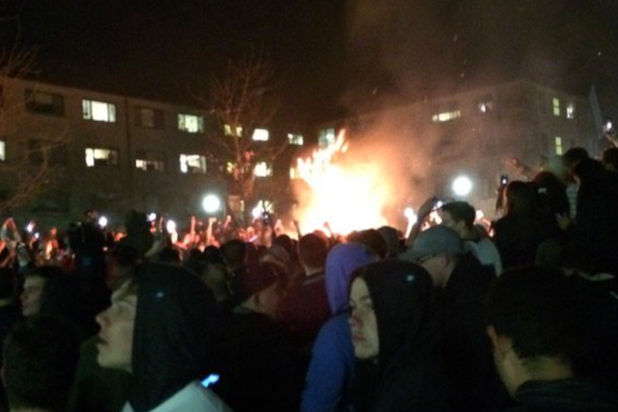 Villanova University won the school’s first NCAA men’s basketball title since 1985 on Monday night, but the celebration got out of hand for quite a few fans of the team.

At least six people were arrested and 25 were injured, according to the New York Post. USA Today reported was arrested for misdemeanor assault on a police horse. Radnor police Sgt. Shawn Dietrich said the individual would remain in custody until arraigned on Tuesday, but did not give any additional details.

The school canceled classes Tuesday after “highly intoxicated” students shouted and cheered on their victory while police in riot gear stood by. Some students reportedly climbed light posts and lit small bonfires.

The severity of the injuries, including the harm done to the horse, have not been reported.

Villanova won the title after Kris Jenkins’ 3-pointer at the buzzer of the title game Monday night lifted the Wildcats over the University of North Carolina, 77-74.

TheWrap reached out to Villanova officials, who did not immediately offer a statement. Watch a video demonstrating the mob on campus below.

An awkward picture of the “Hunger Games” star shooting hoops has been transformed to now include sharks, cats and video games, all thanks to computer magic

The original photo, which started a Photoshop battle on Reddit.