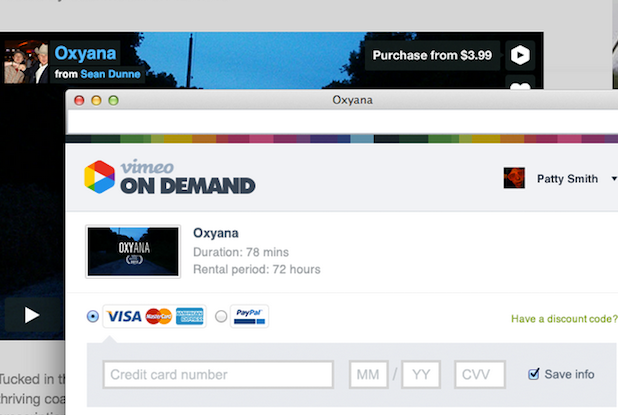 Vimeo will spend $10 million on indie filmmakers who sell their movies with Vimeo on Demand, a service launched a year ago at South by Southwest, the company said Thursday. Filmmakers can sell movies using the Vimeo player, picking how much they want to charge and taking 90 percent of the receipts.

To qualify, a movie has to have raised more than $10,000 on a crowdfunding site or screened at  one of 20 major film festivals, including Cannes, Toronto and Berlin.

Vimeo has offered financial support to filmmakers at various points over the past year to entice them to use the service, and some of this new money will be used to expand ongoing initiatives. Filmmakers who meet the requirements will receive a free Vimeo Pro account provided they distribute their movie on Vimeo. Vimeo Pro accounts cost $199 a year.

Also read: Disney Goes Where No Other Studio Has Gone: An iTunes Movie Storage Deal

The filmmakers can still release their movie elsewhere, but they have to sell it with Vimeo’s service to receive the free account. Unlike with iTunes and Amazon, which require individuals to buy the movie from their store, Vimeo enables people to buy the movie wherever a Vimeo player is embedded.

Filmmakers that are open to some degree of exclusivity — like making Vimeo the only digital seller of the movie — will receive additional financial support.

The goal in all this is simple: expand the library of titles available for sale via Vimeo on Demand, and convince established filmmakers that Vimeo is a viable option for selling their movies.

“We want to expose our platform to as many different creators across genres as possible,” Greg Clayman, general manager of audience networks, told TheWrap. “Our goal is to bring content to our platform, which brings an audience and drives sales.”

Vimeo CEO Kerry Trainor told TheWrap the service has been setting new highs for revenue on a monthly basis, and there’s no question the audience for Vimeo as a whole is growing. It set a new record for viewership in January, reaching 168 million people across the world — 41 million of them in the United States. Now Trainor and Clayman have to convince more of those people to pay for these movies.

“The marketplace for independently distributed paid video is far larger than anybody believes — just as the market for ad-supported video is much larger than anyone believed give years ago,” Trainor told TheWrap. “We have yet to see creators experiment with open VOD.”