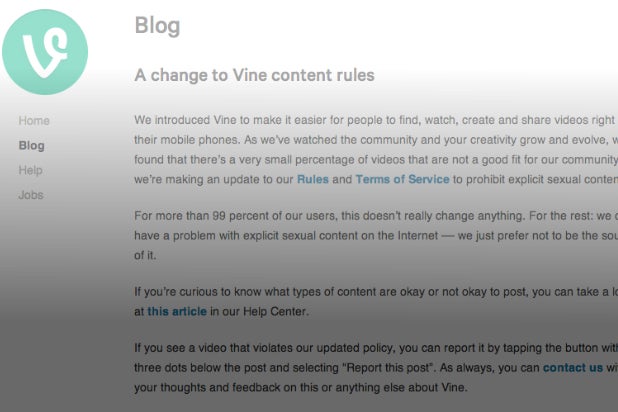 Video sharing app Vine has revised its content policy to ban “explicit sexual content,” following a video that went viral of a teenager performing lewd acts with a Hot Pocket.

“As we’ve watched the community and your creativity grow and evolve, we’ve found that there’s a very small percentage of videos that are not a good fit for our community,” the social networking company wrote in a blog post.

“So we’re making an update to our Rules and Terms of Service to prohibit explicit sexual content.”

Vine, which is owned by Twitter, did not say whether the change in terms was prompted by a video that went viral last week of an 18-year-old man having sex with a Hot Pocket.

The teen, who goes by the handle @VERSACEPOPTARTS, made the six-second video after challenging followers on Twitter to retweet a post 420 times.

Vine said explicit content was not overly common on the micro-video sharing network, but it changed its terms of service to eliminate it altogether.

“For more than 99 percent of our users, this doesn’t really change anything,” the Vine blog continued.

“For the rest: we don’t have a problem with explicit sexual content on the Internet — we just prefer not to be the source of it.”