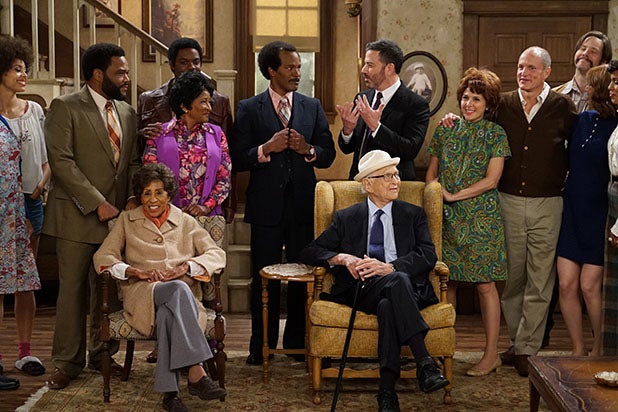 ABC has added seven new cast members to its upcoming “Live in Front of a Studio Audience” holiday special, which will feature re-creations of “All in the Family” and “Good Times.”

Starring as the cast of “Good Times,” Viola Davis and Andre Braugher will play Florida Evans and James Evans. Jay Pharoah will play J.J Evans, Asante Blackk will play Michael Evans, Corinne Foxx will play Thelma Evans, and Tiffany Haddish will play Willona Woods. “When They See Us” star Jharrel Jerome has also been cast in a role yet to be announced. The special will air Dec. 18.

Previously announced cast members for “All in the Family” include Woody Harrelson, Marisa Tomei, Ellie Kemper and Ike Barinholtz who are set to reprise their roles as Archie and Edith Bunker, Gloria Stivic, and Meathead from ABC’s first “Live in Front of a Studio Audience,” which aired in May. Kevin Bacon, Jesse Eisenberg and Justina Machado have also been cast, but their roles are set to be announced live.

Anthony Anderson and Patti LaBelle have been tapped to sing the theme song to “Good Times.”

“Live in Front of a Studio Audience: ‘All in the Family’ and ‘Good Times'” will be produced by Kimmelot, ACT III Productions, Gary Sanchez Productions, D’Arconville, Simpson Street and Sony Pictures Television. Lear, Jimmy Kimmel, Brent Miller, Kerry Washington, Will Ferrell, Justin Theroux and Jim Burrows will all executive produce, with Pam Fryman and Andy Fisher set to direct the live show.

Also Read: Marisa Tomei and the Other Bunkers to Reprise Roles for ABC's Next Live 'All in the Family'

The May event was nominated for three Emmys, winning the one for Outstanding Variety Special (Live). Check out that live special’s live (plus same day) ratings here.