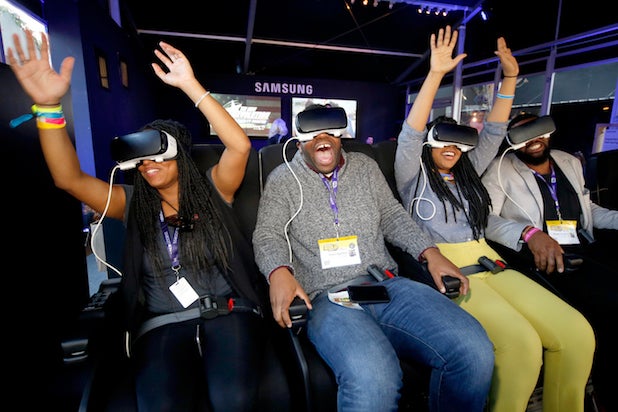 As Felix Lajeunesse walked beside a queue of people stretched for blocks at the South by Southwest festival two years ago, the virtual-reality filmmaker wondered: What rock star had fans lined up for hours? His mental checklist landed on Radiohead before he realized he was en route to the same destination: the homebase of virtual-reality headset maker Oculus Rift.

For years, growing hype about VR, combined with the near impossibility for outsiders to experience it on top-notch headsets, created an event phenomenon: VR demo as PR blockbuster. Headset demonstrations at South by Southwest, Sundance and even the Super Bowl would be slammed with curious consumers hoping to get a taste of the immersive format.

With shipments of high-tech consumer headsets like the $599 Oculus Rift only weeks away, the era of VR unattainability is nearing its end. The phenomenon is likely to end after month’s SXSW festival in Austin, Texas, and the gaming-developer conference GDC in San Francisco. But the downside for publicity stunts has an upside for VR content creators: It means the people who make VR, like Lajeunesse and others, are about to progress from dress rehearsal to showtime.

In that long SXSW line two years ago, “each of those virtual reality headsets felt like the Holy Grail,” Lajeunesse said. “That will radically change in a couple of years.”

VR headsets are generally categorized into two groups. Mobile VR uses a device like a smartphone as both the screen and computing brains to create a VR experience. Meanwhile, tethered VR involves a higher-quality headset and speakers paired with a high-octane computer to run more elaborate experiences.

But tethered VR has remained elusive. Compared to a viewer made out of folded cardboard like Google’s DIY-style option, tethered headsets like Facebook’s Oculus Rift, HTC’s Vive and Sony’s Playstation VR give consumers the opportunity to dive into longer, deeper, more powerful experiences — the kind that tend to create VR believers.

“We have a technical term for it: the ‘Oh shit’ moment,” Miles Perkins, vice president of marketing for VR company Jaunt, told TheWrap. (In January, the company drew more than 10,000 people to a three-day demo of an NFL VR experience linked to the Super Bowl in San Francisco.)

The disparity between the growing hype around VR and the dearth of high-end headsets has created a vacuum of information about what works best, said Tony Mugavero, the founder and CEO of Littlstar, a VR and 360-video distribution company.

There are potentially rich rewards catering to a tech-savvy audience seeking its first experience of the new technology. The total market for all virtual reality content could reach $40 billion by 2020, according to estimates by gaming researcher SuperData Research.

Lajeunesse, the VR filmmaker, spent three years tackling the problem of showing his work to interested viewers. Before the introduction of mobile VR, the only way to share Felix & Paul Studios’ content in 2013 was through events. By 2014, developer-edition headsets made it possible to demo content on his own — just never on his own terms.

Sharing a VR experience with someone in a cafe meant not only taking out a headset but also plugging a computer into a wall. “Everyone in the cafe would wonder what the hell is going on,” he said. “Everyone would ask to take a picture.”

Now in cities like Los Angeles and New York, passers-by seldom seldom gawk when Lajeunesse pulls out a mobile VR headset like Gear VR to demo, but distribution is still far from widespread. He estimated that maybe 2 million headsets are in daily use in the world right now.

“It remains a small channel of distribution, but it’s growing,” he said.

This year marks the landing of a slew of tethered headsets. The $599 Oculus Rift is set to ship to consumers at the end of the month, and HTC plans for its $799 Vive to hit the market in April. On Tuesday, Sony is expected to unveil the release date and other details about its Playstation VR headset. People involved in VR widely expect this year’s holiday season to be a turning point for audience size.

SuperData estimates the user base for VR headsets to be 21.7 million worldwide this year, including everything from DIY-style Google Cardboard viewers to the Rift. In 2020, it predicts that base will widen ninefold to 194 million people.

Standing at the cusp of that kind of growth, VR creators like Aaron Koblin, the co-founder and chief technology officer of virtual-reality company Vrse, describe the years crafting VR content from scratch and building platforms as “preparation” for this shift.

“We see the headsets on the horizon, and so we want to be ready,” he said. “This is the birthing of a new medium.”