What to make of things when a group of well-meaning Hollywood liberals flies into the mouth of the lion’s den by suddenly visiting Iran?

Some of us are left thinking that there must be more here than meets the eye.

After all, no one in Hollywood wakes up the day of the Oscars and thinks: “Hmmm. Perhaps I’ll head to Tehran.”

One clue came from Nancy Hult Ganis, Sid’s wife, who explains that the State Department approved the trip. The State Department spokesman doesn’t work on the weekends, but promised to get back to TheWrap on the question tomorrow.

As a cultural overture in the age of Obama, a visit by the Hollywood A-list is a curious thing. It undoubtedly comes with the best of intentions. But, eyes open: Iran is one of America’s most intransigent foes and the very fountainhead of global Islamic rage against American cultural hegemony.

As Iran expert Reza Aslan pointed out to me yesterday, it’s the kind of overture that can backfire.

Barely 24 hours after the arrival of the Hollywood VIPs – and no doubt unbeknownst to them – an adviser to President Mahmoud Ahmadenijad demanded that Hollywood “apologize” for insulting Iran, and Islam, in its movies. (One of them is the Oscar-nominated “The Wrestler,” in which an Iranian flag is torn by Mickey Rourke.)

What a nice way to welcome American guests making an historic gesture of friendship.

And this from a country that stamped the iconic image of American flag-burning by an angry Middle Eastern mob into our collective consciousness from the 1970s forward.

But this is not an uncomplicated matter. Ahmadenijad is up for reelection in June. Aslan was surprised that the State Department would give its blessing to a trip that might be used to prop him up in any way.

“In some ways this could play into Ahmadenijad’s hands,” said Aslan, who was an adviser on Middle East policy to Hillary Clinton during her presidential run. “He still has a constituency he can get frothing at the mouth at the possibility that this could be another sign of American cultural hegemony.”

Said Aslan: “I find this an odd idea. I don’t see why they would do this. It’s a useless enterprise. These people mean nothing to Iranians. Annette Bening means nothing to the Iranian people. Sending a badminton team would probably do more good than sending celebrities from Hollywood.”

After several days touring Iran, Bening would probably disagree. (And if she chooses to do so on our site, we welcome her comments.)

It is a new time, to be sure. We have a new president who is seeking to turn the page, to demonstrate respect for Arab and Islamic cultures.

But we are talking about a country with enduring ambitions to lead the Islamic world, a task best accomplished by vilifying the United States and demonizing Israel.

I don’t know how comfortable Ganis or Bening would be to see their visit recorded in the Tehran Times just below a story about an ayatollah-prosecutor charging Israeli Prime Minister Ehud Olmert with war crimes. 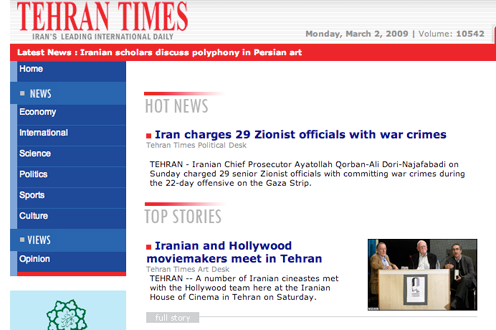 That is undoubtedly the reason why the news of the Hollywood trip was mostly ignored in America. But it broke early on Saturday on an Israeli intelligence website called DebkaFile, citing sources in Washington.

It’s the Middle East, which means it’s complicated. These cultural ambassadors should be aware that – if history is any guide – it’s a place where few good deeds go unpunished.