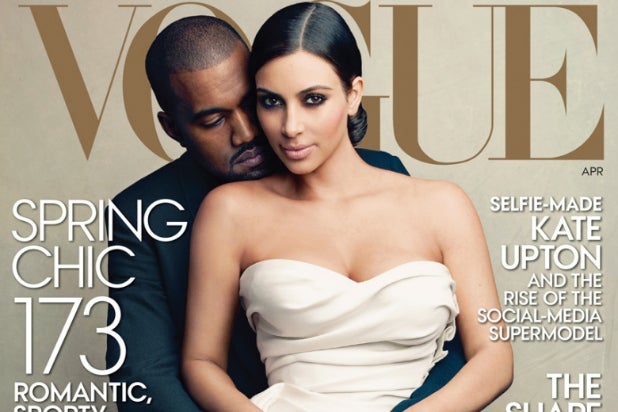 Kim Kardashian and Kanye West posed for famed photographer Annie Leibovitz’s April cover of Vogue, and while the soon-to-be-married couple appeared deeply in love, the internet is not deeply in love with their appearance on the iconic magazine.

The backlash first caught fire Friday when CBS’ “The Crazy Ones” star Sarah Michelle Gellar tweeted: “Well……I guess I’m canceling my Vogue subscription. Who is with me???”

Apparently many readers were just as displeased as Gellar with the choice, as evidenced across social media. The Vogue official Facebook page has racked up 747 comments as of time of this posting — the majority of which are critical of the editor’s decision to feature Kardashian and West on the cover.

So why are so many people upset with Vogue and its editor? West is a record-breaking music artist, who though is considered controversial for moments such as charging the stage to denounce Taylor Swift‘s MTV VMAs win and for referring to himself as a “genius” during his infamous beef with Jimmy Kimmel, one could argue (and some are) that West has just as much right to a Vogue cover as past cover subjects.

The harsh criticism across the web seems to be derived mostly over the feeling that Kardashian is merely “famous for being famous,” and hasn’t earned the coveted crowning achievement bestowed by Wintour. Kardashian, who stars on E! reality show “Keeping Up With the Kardashians,” first rose to fame when a sex tape featuring her and R&B artist Ray J leaked on the Internet.

Traditionally, scoring a Vogue cover has been a feat reserved for and accomplished by Hollywood A-listers, award-winning directors or producers and top fashion industry figures.

TheWrap pulled a sampling of just some of the comments from fans on Vogue’s Facebook Wall:

“We all knew Vogue was dying, but this is it. The official death of Vogue,” wrote reader Freya Greaves.

Jasmine W said: “Well it’s official you don’t need to have an actual respectable talent to be on the cover. You just have to be able to take a dick or be one. And in this case…. Well I don’t think I need to elaborate.”

Michelle A. Morgan added: “Lupita won an Oscar and Kim Kardashian is on the … I can’t even bring myself to say it.”

The angry opinions just go on and on from there. Of course the spoofs came as well, first a Muppets one, with Kermit embracing Miss Piggy, then Seth Rogen and James Franco — the duo that also brilliantly remade West’s music video for “Bound 2” — got in on the action.

Vogue editor-in-chief Anna Wintour penned an editor’s letter defending the decision and preemptively explaining that West did not coerce the magazine into the cover shoot.

“Kanye is an amazing performer and cultural provocateur, while Kim, through her strength of character, has created a place for herself in the glare of the world’s spotlight, and it takes real guts to do that,” Wintour wrote. “I think we can all agree on the fact that that role is currently being played by Kim and Kanye to a T. (Or perhaps that should be to a K?).

Wintour added: “There’s barely a strand of the modern media that the Kardashian Wests haven’t been able to master.”

See photo: Kim Kardashian Gets 1,000 Red Roses From Kanye West for Valentine’s Day, Love Is Safe for a Day

A reader on one publication in response to Anna Wintour’s defense, summed it up with the following comment, quoting the Conde Nast creative director:

Gellar’s tweet also elicited a large response, along with some other choice public responses representing both sides of the controversy:

Do u matter? RT @RealSMG: Well……I guess I’m canceling my Vogue subscription. Who is with me??? — Jonathan Cheban (@JonathanCheban) March 21, 2014

This is such a dream come true!!! Thank you @VogueMagazine for this cover! O M GGGGGG!!! I can’t even… http://t.co/CbD5ThUqor

Got up early so I could throw my new Vogue in a trash can across town.

SO brave of all these celebrities to boycott Vogue. — Nikki Glaser (@NikkiGlaser) March 22, 2014

Is there really a stable, maintainable standard for “deserving of the cover of Vogue?” — Michelle Dean (@michelledean) March 22, 2014

Internet. If you find yourself having an opinion about a vogue cover…. Step away, find a good book.

Calm down everyone mad about the vogue cover. Know what you should be mad about? LITERALLY EVERYTHING ELSE IN THE WORLD.