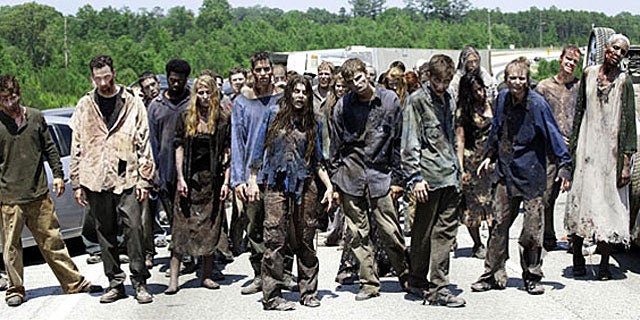 TV's top drama is a grisly, sometimes sorrowful series that kills off characters as fast as it introduces them and almost never slows down to explain what's happening.

Networks could learn a lot from "The Walking Dead."

The AMC series, which ended the first half of its third season Sunday, currently has an average 5.32 rating in the key 18-49 demo. That’s better than the rating for any show on television, except for NBC's "Sunday Night Football."

Factoring in a show's ratings over a week ratings — as networks do to account to DVR viewing — "Walking Dead" slips behind "The Big Bang Theory" and "Modern Family." But just barely.

Maybe network shows should just have more zombies, or violence. "The Walking Dead" has benefited from a national fascination with the undead, and must surely show more intestines per episode than any show in TV history.

But zombies and guts aren't the only reasons "Walking Dead" has a shot at finishing the season as TV's top series — and will almost definitely be its top drama. Some viewers tune in for gruesome spectacle, while others watch through their fingers.

Successful new network dramas are rare – NBC's "Revolution" and CBS's "Elementary" are among the few this season. Those that take the most risks, like ABC's "Last Resort," are often quickly canceled. Dramas are especially big gambles for networks because they are much more expensive than reality shows and comedies.

But "The Walking Dead" makes the case for taking risks anyway — from letting major characters die, to letting viewers sometimes turn to online friends for answers.

1. Surprise us. Asked for the main reason "The Walking Dead" is thriving, showrunner Glen Mazzara points to its unpredictability.

"The show feels grounded, it feels accessible. But it's also unpredictable, and it has a fast pace," he told TheWrap. "There was an article I read about the speed of storytelling on shows like 'Homeland' and 'The Walking Dead.' The things that usually would be saved and built to are being pulled up and sort of happening before the audience is ready.

"That’s something that I learned on 'The Shield' — a type of accelerated storytelling. Especially when you have a very hungry audience like this. We've had other versions of the show in the past that weren't as accelerated, and I think that led to a lot of audience frustration. I think that the pace of the storytelling is right now able to keep up with the audience's expectations."

The most unpredictable thing about "The Walking Dead"? Who lives and who dies. A willingness to kill major characters is perhaps the biggest difference between cable and network dramas. While networks may occasionally kill someone in a season finale, cable shows like "The Sopranos," "The Walking Dead," "Game of Thrones" and "Boardwalk Empire" have killed the characters we least expected, when we least expected.

2. Skip the backstory. Nothing slows down a story like too much explanation — especially when it's repeated episode after episode, for viewers who haven't been watching or paying attention.

"The beginning of the season reestablished all the characters and all the dynamics really quickly and gave everybody an entry point," Mazzara said. "I did anticipate that we would have new audience joining us. I thought maybe people would catch up on DVDs over hiatus or something like that. But now the train's running, and you just need to catch up. We're not going to keep going back and reestablishing the rules. I believe that the audience is on board."

3. Keep it simple. This one's tricky because, if anything, networks are too fond of simple, self-contained stories.

Networks are wary of serialized dramas like "Lost," "The Wire" and "Breaking Bad," which are most rewarding to those who watch every episode. It's incredibly satisfying to watch stories unspool over weeks or years. But it's harder for heavily serialized shows to draw in new viewers, or to play in syndication.

The self-contained nature of "CSI" episodes is one reason the show sells so well all over the world. But at their worst, sealed-off episodes limit character development and change.

"Walking Dead" is the rare show that successfully manages both self-contained and long-term stories, in part by surprising us and skipping needless backstory. It benefits from a simple setup — people are trying to stay ahead of the zombies — that lends itself to both small dramas (will they make it over the fence?) and big ones (should they bring a child into this world?)

"We never want to confuse things, and we certainly don't have a very complicated mythology," Mazzara said. "Part of what I like to do is to make sure every episode has a very clear mission and a very clear objective. …. Even though it is a serialized drama, every episode is hopefully satisfying within itself. … I'm not interested in filler episodes that just connect this episode to that."

4. Leave room for debate. Shows dream of sparking the kind of online debates that make non-viewers want to join the fun. At the same time, shows are afraid of alienating new viewers with scenes that may require interpretation. "The Walking Dead" takes it as a given that viewers will go online for answers.

"Our audience communicates with each other," Mazzara said. "And they have access to all the actors through Twitter. For example, in [one] episode our guys are running through and they came across a cabin. And there's a guy suffering from some type of dementia in the cabin. Some of our audience thought that that guy was like Rip Van Winkle and was not aware that there zombies outside. Other people understand that he did suffer from dementia and was very confused that suddenly these people were in his house.

"So there were debates online: Who was this guy, what was this? We didn't need to explain it. The audience in a sense communicated and talked about it, and they were part of a community and they worked it out. I don't need to explain every single scene to people. Let people talk about it, let people discuss it. And maybe that scene works for some people, maybe it doesn't work for some people. We happen to like the scene and thought it was interesting.

"The audience figures things out. They're smart. They don't need to be spoon-fed."