“The Walking Dead” is about to get a lot more of Rick and Morgan.

That’s according to series creator Robert Kirkman, who spoke about the show’s comic book origins and seemingly boundless future at a NAB Show panel with AMC President Charlie Collier and star Stephen Yeun on Tuesday.

Kirkman provided tantalizingly few specific details about the upcoming sixth season of the hit post-apocalyptic zombie series, but the writer-EP said the dynamic between those two characters that was set up at the end of last season will carry throughout the next.

“Having Rick and Morgan together, finally, again is a huge deal, and it’s definitely going to be a big part of Season 6,” Kirkman said.

Kirkman also teased “a lot of cool stuff” with Yeun’s character Glenn in the upcoming season, which may or may not involve killing off the fan favorite. Both men played coy when it came to the possibility of saying goodbye to yet another beloved “Walking Dead” character.

“We don’t kill the popular characters,” Kirkman joked, to a chorus of laughter in the room.

“If I go — that could happen,” Yeun said, adding that he’s felt lucky to be a part of the phenomenon.

If Glenn does die, it’s a pretty safe bet he won’t go down without a fight.

“The way that we make the show — the writers and everybody really want to focus on making things poignant and purposeful and meaningful,” Yeun said. “So if it were for Glenn to go, then it’s probably going to be awesome.”

Regardless of whether Glenn makes it past Season 6, Kirkman and Collier are both fairly confident that “The Walking Dead” is a series that could live on for years to come.

“This isn’t the kind of show where the creative team is going to say, ‘It’s important to us that we end it here,'” Kirkman said. “The story that we’re trying to tell is so big, and the framework is set in the comics — I’m producing more than 12 issues a year. All of that stuff is stuff that we would like to someday adapt into the show.”

“Our longterm goal was to tell this unrealistically massive huge story, so by going season after season after season, we actually are maintaining the integrity of what we originally set out to do,” Kirkman added. “So I think there’s a possibility to go for many, many years.”

“I do think the evolution of this story and how fresh it becomes, and how real it is … and relatable, makes it something that can go for a long while,” the AMC president said.

As far as the companion series “Fear the Walking Dead,” Collier still wouldn’t spill the beans on a premiere date. Kirkman said the title hearkens back to the time in the earlier seasons of its sister show, where the world was a much more terrifying place. The title also avoided the “Walking Dead: Los Angeles” trope that would have been the “exact wrong thing” for the tone of the series.

And rumors of a movie are still just rumors. As Kirkman said, every episode of “The Walking Dead” is like shooting a little movie, so while the possibility is there, creators are in no rush.

See a segment of the interview below or on YouTube: 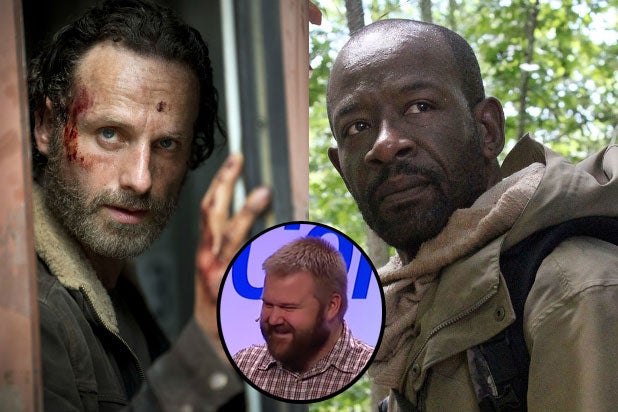