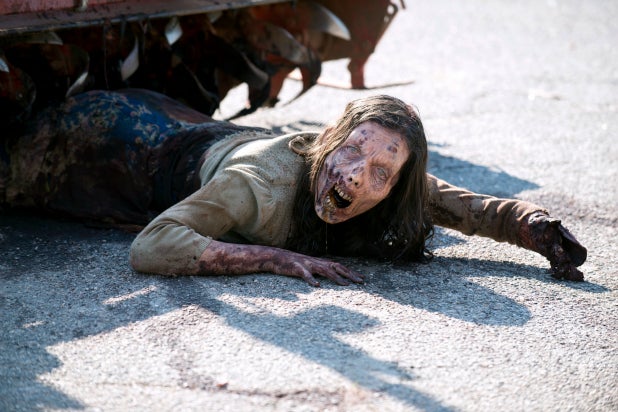 (Spoiler alert: Please do not read on if you have not watched Sunday’s episode of “The Walking Dead”)

Yet another episode of “The Walking Dead” has passed since Glenn fell off a dumpster into a horde of hungry zombies, and fans are losing their patience for an answer to the season’s biggest question: Is he dead or not?

With no definitive shot of the fan favorite’s corpse, fans have been holding out hope that Steven Yeun’s character miraculously survived (probably to die another day, but that’s beside the point).

Despite executive producer Scott Gimple promising that Glenn would return in some form, this week’s episode offered no answers, and fans of the show took to social media to vent their frustrations.

Take a look at a small sampling of the outrage below:

As each week goes by and I still don’t know what happened to #Glenn, this is what I am becoming. #TheWalkingDead pic.twitter.com/VEMnE1r1vR

Is he or isn’t he dead?? Dammit! I want to know! #TheWalkingDead #Glenn

Why is there no rescue operation for #Glenn? There was one for Beth, remember!?! #TheWalkingDead – David Cruz (@CWEBCRUZER) November 9, 2015

@cinders1313 this is killing me ! #TheWalkingDead #glenn pic.twitter.com/1pJaayAmxU

I feel like I never really dealt with #Glenn being dead because I knew he just couldn’t be.. But now I’m getting scared. #TheWalkingDead – Emma Amelia (@_emmaamelia) November 9, 2015

Have to wait one more week?!?! Did #Glenn really die or is he still alive?!?! #TheWalkingDead #TWD pic.twitter.com/Lg9kfqosYc

#thewalkingdead #TWD #TheWalkingDead #Glenn Why does @TheWalkingDead keeps playing with our feelings about Glenn? Is he alive or not??

and another #TheWalkingDead episode without #Glenn pic.twitter.com/G7phX7Xysy

1st #TWD killed off the guy I’ve been in love with for 20 years #ethanembry , & now they won’t tell us what happened to #Glenn #frustrated — shay williams (@alk3faerie) November 9, 2015