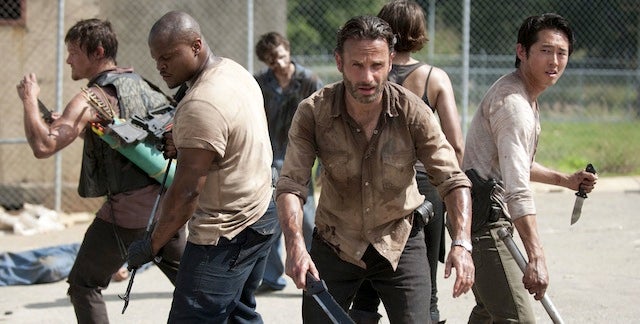 What to expect from the second half of this season of "The Walking Dead"?

More pressure on its poor characters. No cliffhanger at the end. And what showrunner Glen Mazzara calls "the most exciting 10-minute sequence I've ever worked on."

Mazzara is finishing out his two seasons on the "Walking Dead" with eight episodes that begin airing Sunday. He and AMC announced a mutual decision last month to part ways. Their differences over the direction of the show involve its fourth season and beyond, not the third season about to begin its second half after a winter break. There are plenty of things Mazzara doesn't want to discuss about his exit, including what specifically he and AMC disagreed on. He also said he hasn't offered any advice to his successor, "Walking Dead" writer Scott Gimple.

But he did talk about what to expect from his last episodes, what he wants to do next – and the legacy he wants for his final season.

I know you don't want to address it at length, but I'm sorry to hear you're leaving the show.
Thank you. It's fine. You know, I'm happy with the show and delivering my season and stuff, and I'm just trying to go on and do my own thing now. It's actually a pretty good, productive time for me. I'm excited.

Can you say at all what you're working on next?
I have a couple of big ideas that I'm talking to people about. Nothing that I'm ready to announce … but I will say I probably would do something on cable, hopefully out of the box. I want to push myself. I'm excited and I want to make the most of this opportunity.

I tend to take sme time and sort of catch up on movies and books and everything and go through a period where you're taking in a lot of research and inspiring works. … I turned the corner the other day because I started getting a little cranky, like I know I need to sit down and write soon. My wife looked at me and said, "Oh. You're getting that look. You need to sit down with a notebook." The first half of this season left us on a huge cliffhanger. What's next?
What's fun about the whole season is it was designed with 16 episodes in mind, leading to what I believe is a big finale. So we now have introduced all our major characters and storylines and the new settings of Woodbury and the prison and now and set up all of our character dynamics, and now it's time to push it deeper into the characters. And really examine their motivations, their agendas, their alliances. We're going to continue to increase the pressure on these characters and see what they do.

The Governor has a very clear agenda — he wants revenge on Michonne and Rick, and he wants it by destroying the prison. Rick is facing post-traumatic stress syndrome after Lori's death at the exact time that the Governor's coming for him. He's at his weakest point when he needs to be at his strongest.

That puts pressure on Hershel and Glenn and Maggie and everyone else back at the prison. Daryl now has to face the new pressure of trying to reconcile with his brother and incorporate his brother into the group or break off the group with his brother. He's caught between his biological family and his adopted family.

Michonne, who's always been a loner, realizes that there's no life for her out on the road, so she wants to try to incorporate herself into Rick's group at a time when Rick has shut himself off from the world. And Andrea has to face questions of where her loyalty lies. She's caught between trying to get back with Rick's group — she's dealing with the information that those people are still alive — and yet she also feels some responsibility to the innocent people of Woodbury.

She feels that that group possibly abandoned her. She definitely has a strange relationship with Michonne. It's just a very, very, very messy homecoming. Andrea is in the unique position to try to influence the Governor. So the question is, "Is she more useful remaining in Woodbury or joining Rick's group in the prison?" It's a touch choice.

Is the second half more character-based, or as action-filled as the first half?
I think there's a nice balance. We have some episodes with incredible action. There's one episode coming up soon that has I think the most exciting 10-minute sequence I've ever worked on. I just absolutely love it. I think it's fantastic, and I'm very proud to have been a part of it — that we got it into our show. That being said, I did design this part of the season to stop introducing new characters and now push in deeper and examine our characters.

Do we end on another cliffhanger?
The season finale will set up season 4, but there'll be a satisfying end to this season. I don't think it's fair to fans to leave too much of a cliffhanger. … We're going to look for some time of resolution that satisfies viewers at the end of the 16-episode run but also leaves questions so people are excited to come back for season 4.

Have you given any advice to Scott Gimple as he prefers to take over the show?
No.

Why?
I've been focused on delivering the end of my season and working on my own material. I haven't spoken with him.

Where would you like to see the show go, after running it for two seasons?
I would love to see "The Walking Dead" have a long, healthy run. I'm very proud of my work on the show and have made a lot of friends and worked with a lot of talented people. I'm not going to comment creatively on where I'd like to see the show go, but I'm looking forward to these men and women building on what's there and keep delighting fans for many years to come.