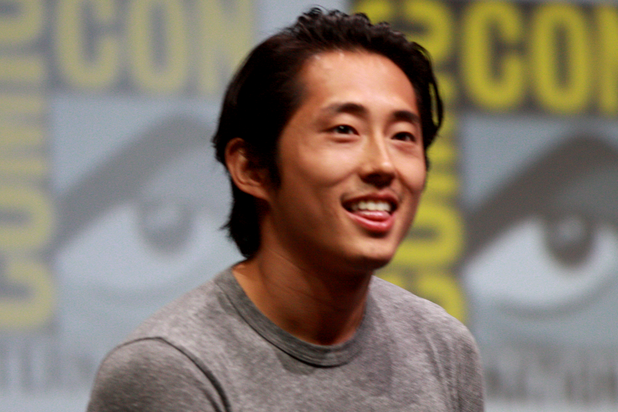 Steven Yeun took a big leap of faith back in 2005, deciding that instead of pursuing a proper — and lucrative — career, he’d instead move to Chicago to try his hand at acting.

The risks here were twofold: First, it is of course remarkably difficult to forge and sustain a career as a working actor — and it is exponentially more difficult to do so as an Asian-American.

Exhibit A: Yeun is one of the most important cast members on the biggest show on television, “The Walking Dead,” and he’s still fighting hard to earn the sort of auditions that reflect his success.

Also read: Michael Pitt-Brit Marling Film ‘I Origins’ Is Actually a Prequel to a Sequel That Doesn’t Exist Yet

“People ask, ‘So, how are the roles now? You must be getting so many.’ And it’s like, I don’t know if you know, but I’m Asian still,” Yeun told TheWrap earlier in July, laughing. “It’s not a complaint, that’s just how it is now, and I have to forge my own path through it and see that through. I think that if I had not been Asian, I probably would have a whole plethora of roles, at least to audition for, but it’s just not what has been written.”

It almost seems as if Hollywood is going out of its way to avoid Asian actors, when movies based on mangas are cast with white leads (see: “Speed Racer” and “Dragonball”), Asian movies being remade with white actors (“Oldboy”), and white actors actually playing Asians (“Cloud Atlas” and “The Last Airbender”).

Yeun’s first film role, as a scientist and best friend to Michael Pitt in “I Origins,” is a good start. The part doesn’t cast him as a nerdy sidekick, as so many other scripts call for; Yeun’s Kenny is a smart and slick core character who offers a lot of the comic relief in Mike Cahill‘s very serious film, undercutting the self-seriousness that Pitt presents.

The freedom to choose how he’d play a character — in this instance, he wanted Kenny to be refined — is not a luxury that Asian actors often enjoy. So instead of scouring scripts and casting calls for chances to quietly tweak cliches, Yeun is simply developing his own material.

First comes an adaptation of Kang Chol-Hwan’s memoir “The Aquariums of Pyongyang,” which among other htings, details the author’s childhood years living in a North Korean concentration camp. Yeun will executive produce and star in the film, playing the author.

There are several other projects in the pipeline for Yeun, as well, early in development.

“We’ve been working on some comedy stuff and in cartoon form, as well,” he revealed. “And then there are some film ideas that have always been batting around my head. I just want to definitely stretch that muscle, because you can’t just wait for other people to give it to you.”