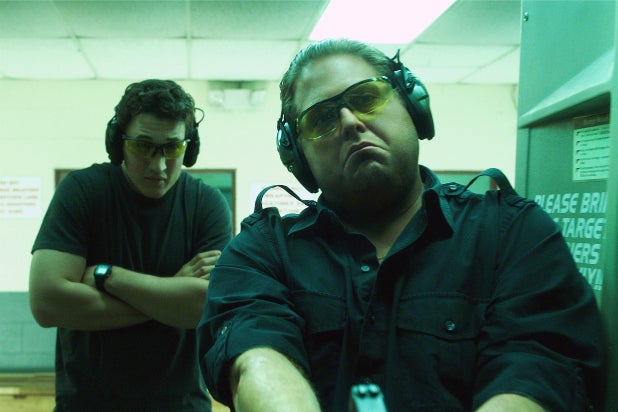 Directed by Todd Phillips and starring Jonah Hill and Miles Teller, “War Dogs” is on track for a $13 million opening weekend, according to Warner Bros. estimates. The movie is based on a true story of two men who won a $300 million contract from the Pentagon to arm America’s allies in Afghanistan. Something of a bromance, “War Dogs” also features Bradley Cooper in a small but memorable role. The film’s budget was $40 million.

In comparison, Tina Fey‘s recent war comedy “Whiskey Tango Foxtrot” grossed $300,000 in its Thursday previews and went on to make $7.6 million on its first weekend, based on a $35 million budget. The genre is a tough one to sell, and war-based comedies have had trouble resonating with audiences in recent years, as Bill Murray‘s “Rock the Kasbah” proved last fall.

Also Read: 'Ben-Hur' Remake Is 'Forgettable and Foolish,' and 8 Other Unholy Reviews

“War Dogs” has received decent reviews so far — it has a score of 60 percent on Rotten Tomatoes.

The critically acclaimed 1959 “Ben-Hur” film grossed $74 million on a budget of $15 million, which was the most money spent to make a movie at that time. The remake had a hefty budget of $100 million, and multiple trackers are currently setting its opening weekend gross at a paltry $12 million on average, while Paramount is being more optimistic with a $20 million estimated gross.

It follows the epic story of Judah Ben-Hur, who flees his homeland after being falsely accused of treason only to come back years later to seek revenge. The film currently holds a score of 29 percent on Rotten Tomatoes.

The estimated opening of “Ben-Hur” could be even worse than that of Universal’s “Warcraft,” which was widely considered one of the summer’s biggest bombs. It bowed to $24.2 million domestically, against a hefty $160 million budget.

“Kubo and the Two Strings” grossed $515,000 at the Thursday previews, ahead of what the studio expects will be a $12 million weekend.

Voiced by Matthew McConaughey, Charlize Theron and Rooney Mara, the animated film was directed by Travis Knight. “Kubo” was produced by Laika, the production company behind hits like 2009’s “Coraline” and 2014’s “The Boxtrolls.”

“Kubo” was produced on a $55 million budget and currently holds a score of 92 percent on Rotten Tomatoes.