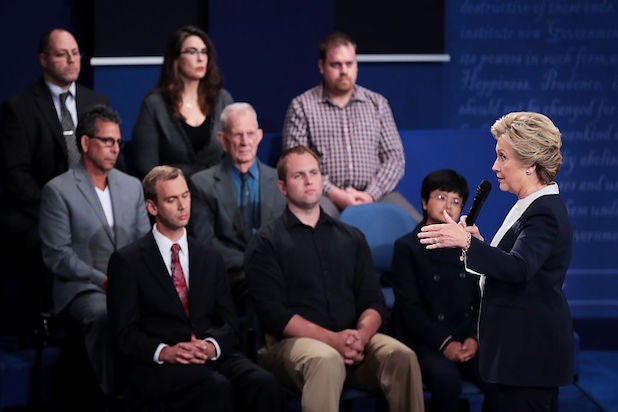 The final presidential debate between Hillary Clinton and Donald Trump is tonight at 9 p.m. ET and will be available to watch almost everywhere.

Chris Wallace will moderate the debate in Las Vegas, marking the first time ever that a Fox News journalist had refereed a general election presidential debate. The debate could be one of the most-watched TV events in history as voters are eager to hear the final argument from each candidate.

Wallace has selected the following topics to address: Debt and entitlements, immigration, economy, Supreme Court replacements, foreign hot spots and fitness to be president. NBC, CBS, ABC, CNN, Fox News, MSNBC, Fox Business, PBS, Univision and C-SPAN will show the debate, but if you can’t decide where to watch, don’t worry, TheWrap has you covered.

ABC News’ digital coverage of the debates will be streamed live on Facebook and ABC News will incorporate viewers’ comments, questions and conversations in the Facebook Live coverage.  ABC News’ live streams will also be available on ABCNews.com as well as its apps on mobile and OTT.

“PBS NewsHour” will air the debate in its entirety.

Bret Baier and Megyn Kelly will anchor primetime coverage while their colleague Chris Wallace moderates the debate. The majority of programming on Fox News is live from Las Vegas throughout the day. An extended edition of “The Kelly File” airs live from Vegas following the debate.

Additional information will be added as it becomes available.