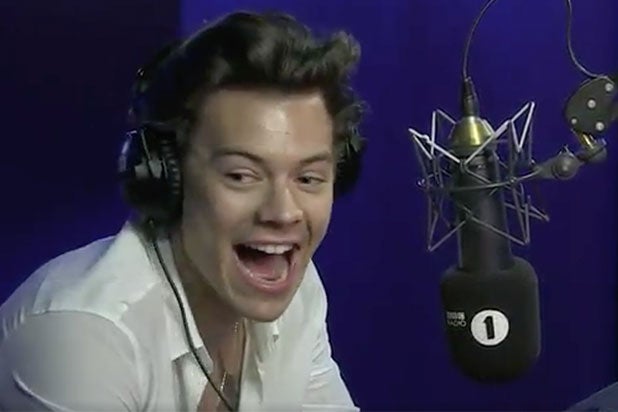 Is Harry Styles’ song “Two Ghosts” about ex Taylor Swift? After an interview with BBC Radio 1, we still don’t know for sure… but we have a good idea.

When the singer was asked about whether the song was about his famous ex-girlfriend, Styles squirmed in his seat and asked his manager for help. All he could share about the song was, “I think it’s pretty self-explanatory.”

The lyrics of “Two Ghosts” describe someone with “same lips red, same eyes blue,” which obviously led many to believe he was referencing Swift.

“I think, ya know it’s about sometimes things change and you can do all the same things… and sometimes it’s just different, ya know?” he said. “2017, philosopher, London.”

Host Nick Grimshaw quickly realized he wasn’t getting anywhere with Styles so decided to play the track instead, introducing it as “the one about Taylor Swift.”

And Styles’ reaction is priceless.

The former One Direction star reportedly dated Swift from 2012 to 2013. The couple was always pretty vague about their short-lived romance, until Styles opened up about it in an interview with Rolling Stone last month.

“Certain things don’t work out,” he said. “There’s a lot of things that can be right, and it’s still wrong. In writing songs about stuff like that, I like tipping a hat to the time together. You’re celebrating the fact it was powerful and made you feel something, rather than ‘this didn’t work out, and that’s bad.’ And if you run into that person, maybe it’s awkward, maybe you have to get drunk … but you shared something. Meeting someone new, sharing those experiences, it’s the best shit ever. So thank you.”

Watch the singer squirm below.