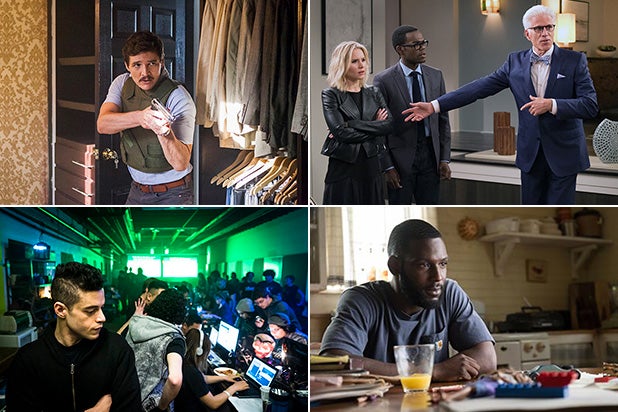 “American Masters: Richard Linklater” (PBS)
On Friday, PBS will air the latest installment in its “American Masters” documentary series, this time tracing the career of beloved filmmaker Richard Linklater. Patricia Arquette, Ethan Hawke and Matthew McConaughey are among those who appear throughout the 90-minute documentary about the man behind such films as “Boyhood,” “Dazed and Confused” and the “Before” trilogy.

“The Walking Dead” (AMC, Netflix)
After a bloody and divisive seventh season, AMC will air back-to-back episodes of “The Walking Dead” throughout the Labor Day weekend, providing fans the perfect opportunity to catch up on the post-apocalyptic zombie drama before it returns for Season 8 next month.

“The Tick” (Amazon)
Led by Griffin Newman and ‎Peter Serafinowicz, Amazon’s reboot of “The Tick” adds a grounded realism to the trademark cheeky humor of Ben Edlund’s superhero send-up. The six episodes currently available to stream — half of the 12-episode first season — have been generally well-received by critics, though this iterations more dramatic elements have proved too much for some.

“You’re the Worst” (FXX, Hulu)
One of the most underrated comedies on the air, FXX’s twisted romantic comedy “You’re the Worst” is gearing up for its fourth season, after ending its last run of episodes on a devastating cliffhanger. The uninitiated have until Wednesday to catch up (Season 1-3 are available to stream on Hulu) on Stephen Falk’s heartbreaking and consistently hilarious series about two terrible people trying to make a relationship work.

“Queen Sugar” (OWN, Hulu)
Ava DuVernay’s “Queen Sugar” is a slow-burn family drama hailed as one of the most accurate portrayals of black southern life to ever grace American television. The show, led by Kofi Siriboe and Rutina Wesley, is currently in the middle of its second season, set to return with a two-night midseason premiere in October.

“Mr. Robot” (USA, Amazon)
Helmed by auteur Sam Esmail, USA’s hacker drama was an instant hit when it premiered in the summer of 2015. It was an awards magnet, with star Rami Malek taking home an Emmy for his portrayal of troubled computer genius Elliot Alderson. Now, the acclaimed series is about a month out from its Season 3 premiere, plenty of time for fans to parse the intricately drawn drama for clues about what’s to come.

“Outlander” (Starz)
Beloved by its primarily female viewership, Starz’ adaptation of Diana Galbadon’s “Outlander” series is a week away from its Season 3 premiere, finally bringing an end to the hiatus fans have lovingly dubbed “Droughtlander.” Adapted by “Battlestar Galactica’s” Ronald D. Moore, the historical romance with a fantastical twist has been hailed for its emotional storytelling and unapologetic use of the female gaze.

“The Good Place” (NBC, Netflix)
Michael Schur is one of the best sitcom writers currently working on broadcast television, with credits that include “Brooklyn Nine-Nine,” “Parks and Recreation” and “The Office.” His latest for NBC, “The Good Place,” was well-received from its first episode, but the response went through the roof once the show pulled off a truly maniacal twist in its Season 1 finale.

“Terrace House: Aloha State” (Netflix)
A fascinating twist on the “Real World” format, “Terrace House” puts six Japanese-speakers in a house together — “Aloha State” moves the location to Hawaii — where they attempt to find romance with one of their new roommates. All the while, a panel of Japanese comedians comment on the action, adding a meta layer to what is otherwise a refreshingly low-stakes, low-drama entry in the reality TV landscape.

“Escape to the Country” (BBC, Netflix)
For those who love HGTV’s “House Hunters” and “House Hunters: International,” BBC’s entry in the house-shopping genre is the scenic, relaxing and endlessly watchable “Escape to the Country.” Every episode, Brits fed up with life in the city visit three different properties in the English countryside, weighing options that include historic castles, traditional cottages and sprawling hillside properties.

“Gossip Girl” (The CW, Netflix)
It’s hard to believe that it’s been nearly a decade since the premiere of “Gossip Girl,” the hit teen drama from “The OC” creator Josh Schwartz that made Blake Lively, Leighton Meester and Penn Badgley household names. Vanity Fair just published a much-discussed retrospective to mark the anniversary, but for fans feeling nostalgic, the entire series is streaming on Netflix.