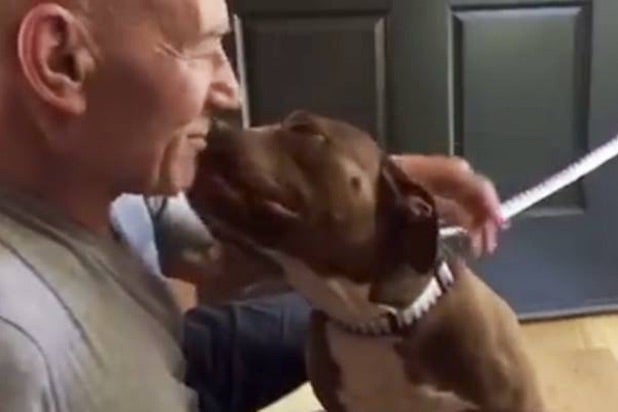 Shakespeare, “Star Trek: The Next Generation” and the “X-Men” film franchise were a piece of cake compared to Patrick Stewart’s latest role: that of doggie foster dad to a red-headed pit bull named Ginger.

Ginger was living in a Los Angeles-area animal shelter when Lesley Brog, founder of the nonprofit animal rescue group Wags and Walks, spotted her. Contrary to the stereotype that pit bulls are wild and dangerous, Brog noted Ginger’s sweet disposition and wanted her to have someone special in her life. And that’s where Stewart came in.

The “Logan” star had been active in an anti-dogfighting campaign with the American Society for the Prevention of Cruelty to Animals, and he had expressed an interest in fostering a dog, “specifically a pit bull type dog,” ASPCA spokesperson Emily Schneider told “Today” via email.

Thanks to @ASPCA and @WagsandWalks Sunny and I are finally fostering our 1st pitbull! Meet Ginger. I’m in LOVE. #AdoptDontShop pic.twitter.com/VQUBDvZhi9

Our foster doggie Ginger is sleeping and snoring on our couch and I can honestly think of no greater compliment. @ASPCA @WagsandTails

Stewart admits it: He’s in love. He and his wife, Sunny Ozell, plan to adopt Ginger and give her a permanent home. And judging by Ginger’s smiley face, she’s OK with that.

@SirPatStew @ASPCA @WagsandWalks Ginger is like little Orphan Annie to your Daddy Warbucks ” I think I’m gonna like it here!” Woof woof ????????????

From what I understand rules and consistency are everything as a foster dog parent. #GingerGurl @ASPCA @WagsandWalks #AdoptDontShop #pitbull pic.twitter.com/aCvKtwlxSA

@skrishna Like, come on. That is a man in love with his dog.

So, if you thought all that was cute, you must check this out. Stewart’s wife Sunny Ozell was cuddling with Ginger when… well, just watch this:

Stewart’s plethora of fans ate this up like candy, with one fan even offering to don a canine costume on his behalf.

@SirPatStew @ASPCA @WagsandWalks anybody got a dog costume I can buy?

@SirPatStew @ASPCA @WagsandWalks anybody got a dog costume I can buy?

@Guppyinfishtank @SirPatStew Every time you think “nope”, he does another amazing thing and you realize you were wrong. #RoleModel

@BartholomewD @SirPatStew @ASPCA @WagsandWalks I thought the same! That’s not a foster, Ginger is HOME