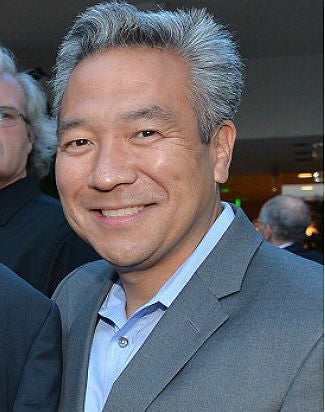 You thought Ben Affleck as Batman was the last of the big announcements coming out of Warner Bros. and DC Comics? Think again.

Speaking Thursday at the Bank of America Merrill Lynch Media, Communications and Entertainment Conference in Beverly Hills, Warner Bros. CEO Kevin Tsujihara hinted that the studio is finally poised to start vigorously exploiting its DC Comics unit, which he said already has “two huge games” and three animated series on the way.

The WB chief seemed pleased with the most recent revelation – that Affleck would soon be donning the caped crusader’s cowl – and hinted that the Oscar-winner would present an older, more jaded Dark Knight than Christian Bale‘s.

“He’ll be kind of tired and weary and seasoned — and he’ll have been doing it for a while,” Tsujihara said. “Ben is perfect for Zack’s vision for that character … We think it’s gonna be huge.”

He also broached the partnership with J.K. Rowling announced just hours before, not committing to more than one film — but conceding that the studio hopes to build a film franchise that will work across several divisions, including video games and its new Potter theme parks.

As a screenwriter, Rowling’s film “Fantastic Beasts and Where to Find Them” — required reading at Hogwarts in the “Potter” books — will go back in time to spotlight the textbook’s author Newt Scamander, a character also portrayed in Rowling’s literary wizarding universe.

Also read: Ben Affleck Is Batman: 16 Actors Who Played the Dark Knight Before Him (Photos)

He also touted the sale of two WB television shows to HBO: “Westworld” and “The Leftovers.”

“I’m really excited and happy we sold our first pilots to HBO,” he said. “That was about the culture changing, and the dynamics between our two divisions changing. I’m really excited about that opportunity because selling to premium cable is important.”