Testing the limits of 3D exhibition capacity in the U.S. and Canada, Warner’s “Clash of the Titans” grossed $61.4 million this weekend, according to studio estimates, about what was expected for a 3D-converted remake with excellent pre-release tracking.

With $2.7 million tallied in a limited number of Thursday-night runs, "Titans" — co-produced and co-financed by Legendary Pictures at a cost of around $125 million, which included late-game 3D conversion — has now grossed $64.1 million in North America.

Amid an overall domestic box office that was up 36 percent over Easter Day weekend last year, Lionsgate Tyler Perry follow-up “Why Did I Get Married Too” finished second, out-performing its projections with $30.1 million. It’s the second biggest opening of Perry’s nine films, trailing only last year’s "Madea Goes to Jail," which premiered to $41.3 million. 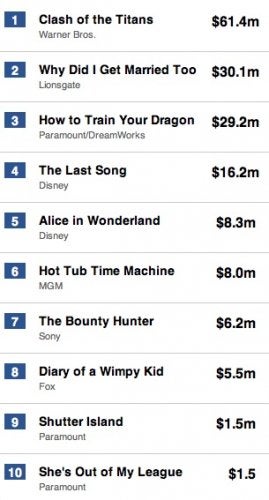 DreamWorks Animation’s 3D “How to Train Your Dragon” finished third with $29.2 million, dropping only 34 percent from its premiere a week earlier and upping its cumulative domestic total to $92.2 million.

Meanwhile, largely squeezed out of the 3D exhibition market despite its sustained momentum, Disney’s "Alice in Wonderland" grossed $8.3 million playing at about 600 3D locations.

One other film opening wide this weekend, Disney’s “The Last Song,” grossed $16.2 million. Based on a novel by romance maven Nicholas Sparks and starring Miley Cyrus, the film opened on Wednesday and now has a cumulative gross of $25.6 million.

The big story of the weekend, however, was “Titans,” which garnered a “B” grade from moviegoer word-of-mouth tracker CinemaScore – and a “B-plus” among audience members 25 and under – despite poor reviews.

Starring “Avatar’s” Aussie leading man, Sam Worthington, as Greek demigod Perseus, “Titans” derived 52 percent of its domestic revenue from 3D runs at 1,810 locations, despite industry speculation that moviegoers might demur on spending the 3D up-charge for a movie that was converted to the format late in the post-production process.

“We were absolutely sold out in every single show in our 3D locations,” said Warner distribution chief Dan Fellman.

With the movie successfully opened Stateside, Warner will commence the bulk of “Titans’” foreign runs next weekend.

For its part, the DreamWorks-produced, Paramount-distributed “Dragon” wasn’t terribly impacted by the cramming in of “Titans” into a North American 3D exhibition universe that currently tallies under 5,000 screens.

Playing in 2,178 3D-equiped locations, including 186 IMAX theaters, “Dragon” kept its 3D screen allotment largely intact from its opening a week ago.

And after two weekends of highly competitive play, “Dragons” only trails the pace set by the movie it has been frequently compared to, DreamWorks’ 2009 3D hit “Monsters vs. Aliens,” by about $12.5 million. (“Monsters” tallied $104.8 million after two weekends.)

A week ago, when “Dragons” got off to a disappointing $43.7 million opening, that differential stood at $15.6 million.

The weekend’s other big story was the performance of “Why Did I Get Married Too,” which was only projected to take in around $25 million.

Lionsgate officials credit producer Perry for promoting the film aggressively on his recent live theater tour. “Also, the playability of the original ‘Why Did I Get Married’ was better than any other Tyler Perry movie,” noted a studio executive.

With the studio’s much-buzzed-about Matthew Vaughn acquisition “Kick Ass” opening in the U.K. to $5.7 million this weekend, studio officials are privately hoping to see Perry’s $41.3 million mark for “Madea Goes to Jail" — which is also the studio’s all-time top opening — fall on April 16 when "Kick Ass" premieres in the U.S.

“I don’t want to jinx anything,” said one studio official. “A $25 million opening would be great, too.”