Is it all over but the shouting??

Leave it to the New York Times to take 5,000 words to give us a small amount of new information about the ailing Weinstein Company, which David Segal (um, who?) does in Sunday’s business section just weeks after one of the paper’s Hollywood correspondents weighed in on the very same subject.

And leave it to the ever-crafty Harvey Weinstein to tell his tale of woe to a reporter who has never written a word about him or his company, or his previous companies, according to my Google search. 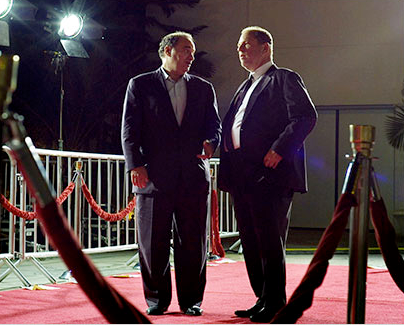 So here is the news, after thousands of words, and six long, long e-pages of preamble, the big reveal, the golden nugget — Harvey’s mea culpa: “In the end, I realized that I’m not a good C.E.O., I’m not a good manager,” he said.

In addition, Weinstein admitted to failing to focus on the filmmaking at his new company, and concluded: “I thought I could build the company and delegate authority, and that’s where it went wrong.”

Now this is interesting.

Let’s start with Weinstein’s choice of words — “In the end” — which certainly makes it sounds like he really believes that it is the end.

And it is instructive to consider that Wall Street may have regarded Weinstein as a traditional CEO or manager before entrusting him with, say, $1.2 billion.

You must be joking.

Harvey and Bob Weinstein are showmen, Barnum and Bailey meet modern day Hollywood. No one expected them to be quarterly performers with predictable returns on investment. No. Investors in the Weinsteins were hoping for a redo of the old fairy dust: big money, dinner with Nicole Kidman and permanent tickets to the Oscars.

Segal did have a look at the initial offering for investment in the Weinsteins, and learned that they were predicting $160 million in profits for 2009.

They are clearly nowhere near profit. Segal notes:

“The first eight months of this year have been particularly dreadful for the Weinsteins. They have released only four films, in a limited number of theaters, and they have so far brought in a total of $1.3 million domestically.”

But it is a shame that the Times gave the assignment of the Weinstein’s only on-the-record interview – the one we’ve all been chasing as rumors of the company’s imminent demise have risen to a deafening din – to an inexperienced hand.

Segal was given extraordinary access – he got to sit in on production meetings, and was shown six full films, including ads and – I still find this amazing – rough cuts. That amounts to plenty of razzle-dazzle, and precious few financial facts.

As a result, a great many specific questions go unanswered (and quite possibly unasked):

· Segal does not mention progress in restructuring the Weinstein Company’s finances, which has been the subject of much discussion and the focus of the Miller Buckfire review.

· He does not ask specific questions about whether the company has the money to release the rest of its slate this year, which many nervous folks in Hollywood are worried about.

· We do not learn how far in debt the company is at the moment, how much cash remains nor how much it needs to ride out the slate that Harvey is hoping will save the company.

· Segal got to see six films, but we hear nothing of whether we can expect a rich vein of box office cash out of any of them. (A Miramax Weinstein executive tells me he did not see “Nine,” which I think represents the company’s best hope for salvation. ‘Inglourious Basterds,’ meanwhile, is tracking to open at $25 million.)

We also learn no specifics at all about the ‘self-inflicted wounds’ of investing in Halston, the social network A Small World, and the cable network Ovation.

How much was invested? How much lost, since Harvey is in confessional mode?

There are some errors of judgement too; Segal suggests that investors in The Weinstein Company did not consult former Disney CEO Michael Eisner for his opinion. That’s quite laughable; no one would have needed to seek Eisner’s formal opinion to know what he thought of the brothers before tossing them out on their keesters while, Grinch-like, keeping the beloved name Miramax for Disney to own and completely marginalize.

Here is Segal’s conclusion: “the Weinsteins adopted the methods of old, bloated Hollywood, rather than finding a new way to again outfox the majors…. Harvey has been gravitating to more star-driven vehicles with larger budgets.”

But Harvey doesn’t know how to do it any other way. He long ago gave up the “Pulp Fiction” model for the more extravagant, and glitzy path of “Chicago,”"Gangs of New York" and "Cold Mountain."

Which is why “Nine” could be his ace in the hole, if it works.

What Weinstein may not know how to do is how to make the math add up.

Long time loyalist Kevin Smith gets the last word; and his rejection of the Weinsteins may say more than any bean-counter’s spread sheet or Grey Lady magnum opus.

“They had impeccable taste when they were hungry,” Smith says. “The problem is that they’re not really hungry anymore. They’re starving and desperate.”

Coming Soon: A Sneak Peek at Some of TWC’s Upcoming Releases