That’s the big-and-sexy question looming over HBO’s new series “Westworld” — the one that showrunners keep spoon-feeding viewers as the robot Maeve (Thandie Newton) “realizes” her perceived reality that is “experienced” within a western landscape is not reality at all.

It’s the question Dr. Robert Ford (Anthony Hopkins) comes close to answering when he claims that the androids are “free under my control,” and also the one raised when Dolores (Evan Rachel Wood) is inspired to venture beyond her programmed loop after disturbing memories surface inside her robot mind.

The show revolves around robots that exist inside a virtual world that caters to wealthy human customers who seek sex, adventure, and, well, more sex. Beyond satisfying customers’ every desire and serving up a grand interacitve adventure, audiences soon discover the world’s creator (Hopkins) has been tinkering with the android hosts, adding so called reveries to their code that make them seem more human.

“Westworld” takes place in the near future and as the story unfolds, implies the automatons are, in fact, aware in a way that serves the requirements of human consciousness.

However, the idea that these robots can think and perceive subjectively like humans is “ridiculous,” John Searle, University of California at Berkeley professor and leading philosopher of the mind, said.

“Computation is never sufficient for a thought,” he told TheWrap. 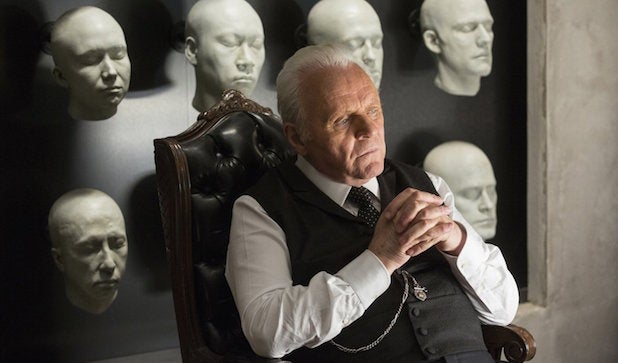 Of course, one of the most satisfying features of science fiction is just that — it’s fiction. And by no means is Searle suggesting people stop watching the show due to its inapplicability in the real world.

But his widely accepted arguments about consciousness are in direct conflict with the ones presented on the show, which makes references to thinker Julian Jaynes’ “bicameral mind,” a theory of consciousness which gained prominence in the mid-’70s. On the show, Ford (Hopkins) has programmed a bicameral mind into the robots as a way to, in his words, “bootstrap consciousness.”

Also Read: How 'Westworld' May Have Revealed the Entrance to the Maze

TheWrap asked Searle, could this even be possible?

In short: No. “A computer program is defined purely in terms of symbol manipulations,” he said, adding, “They are not sufficient for mental human contents.”

Searle gave a recent TED Talk that further explains his position, saying that consciousness is a “biological phenomenon,” and compared it to photosynthesis and digestion.

Also Read: 'Westworld' Fan Theories: Who Is the Man in Black?

Consciousness arises from lower level brain functions, according to him. H2O is to water as the brain is to consciousness. “It’s a condition that the system is in,” the Berkeley professor said. You can freeze water to turn it into ice (which is then no longer water). You can go from conscious to unconscious “depending on the behavior of the molecules in your brain,” he said. Like when a person dies, their brain molecules cease to function in a way that allows consciousness to arise.

Searle does admit it’s conceivable that one day humans may be able to build a sentient machine. But, given the latest advances in neuroscience, we are no where close to getting there.

“Since we don’t know how our brains do it, we’re not in a position, so far, to build a conscious machine,” he argued in the Ted Talk.

“Conscious states by their nature are subjective,” said Searle. “Computation is defined as symbol manipulation. That’s purely syntactical. That’s symbolic. We know that human consciousness has something more than that. It’s got a content in addition to the syntax.”

Therefore, a computer program, like the one dramatized in “Westworld” — no matter how sophisticated and convincing to other humans it is — can’t be conscious.

Whether it’s ”Outlander“ or ”Daredevil,“ TheWrap has gathered some of the most beautiful, epic and highly-produced main titles in recent memory