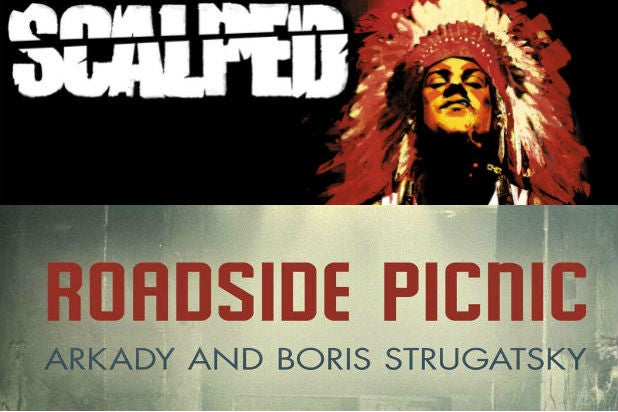 “Scalped” is based on the DC Comics series of the same name written by Jason Aaron and illustrated by R.M. Guéra.

The series is described as a modern-day crime story set in the world of a Native American Indian reservation. It will explore power, loyalty and spirituality in a community led by the ambitious Chief Lincoln Red Crow, as he reckons with Dashiell Bad Horse, who has returned home after years away from the reservation.

“Big Love’s” Doug Jung will serve as the writer and executive producer for the pilot, with “The Flash” and “Arrow’s” Geoff Johns also executive producing. Warner Horizon will produce along with DC Entertainment.

“Roadside Picnic” is based on the novel by Arkady and Boris Strugatsky. In a near-future world where aliens have come and gone, the series follows Red, a veteran “stalker” who has made it his life to illegally venture into the once inhabited zone and scavenge the abandoned remains of the alien culture.

“Alien: Covenant” screenwriter Jack Paglen will write the pilot with Alan Taylor directing. Both will also serve as executive producers along with Vivian Cannon and “The Fast and the Furious” producer Neal Moritz. Sony Pictures Television and Original Film will produce the series.

The pilots are the latest attempts by WGN America to break into producing original scripted content. “Salem” is going into its third season on the network, while “Manhattan” was recently canceled after two seasons.

WGN America launched “Outsiders,” about a mountain clan fighting back against a coal company, earlier this year, and will premiere the Underground Railroad drama “Underground” on March 9.