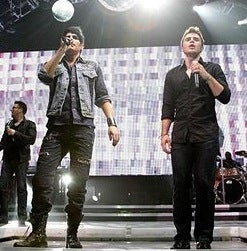 How much star power can you afford with your champagne?

Until ABC booted Adam Lambert from its New Year’s Eve telecast, his performance could have welcomed 2010 on a racy note for free. Lambert’s consolation booking at a Pamela Anderson-hosted party on the Paramount lot will reach a far smaller audience and set you back $150. Lambert can take comfort in continuing to vanquish his “American Idol” victor Kris Allen. The latest shaming arrives in our roundup of the stars’ New Year’s drawing power.
Below is a ranked sampling of the “box office” that various names from the A-list to the F-list can command on the biggest party night of the year. Prices are based on lowest-tier general admission entry to their event.
· $425 – Performance art by 2009’s breakout attention magnet Lady Gaga at the Fontainebleau in Miami Beach. “Sticker” prices go as high as $25,000 for a poolside cabana for 25. (At left, the queen of New Year’s meets Queen Elizabeth II.) 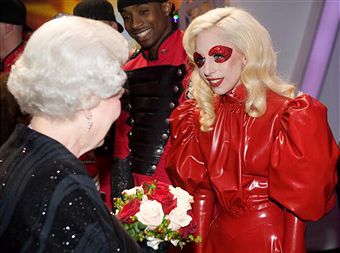 · $375 – “The Hills” star Brody Jenner (right) will be “one” of the priciest hosts in the country at the Gansevoort in Miami Beach.
· $250 – Rapper, Actor, and Author 50 Cent at Pure inside Caesar’s Palace. No actual performance guaranteed.
· $210 – No microphone needed for Christina Aguilera, either. The normally party-shy songstress will “host” at TAO inside the Venetian in Las Vegas.
· $200 – “Twilight: New Moon” star Kellan Lutz with G4 TV’s soon to be “Iron Man 2” star Olivia Munn. The duo will launch new entry “Klutch” in Miami Beach. (Former Dancer-with-a-star Macy Gray appears elsewhere on “the beach”.) 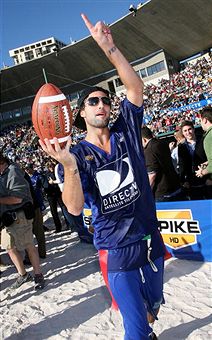