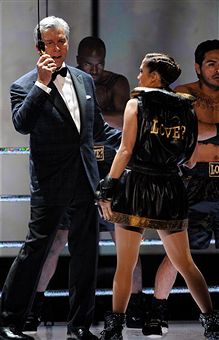 Several years ago, it was rumored that

insured her rear assets with Lloyd’s of London for $27 million. If the graveyard shift at Lloyds was watching ABC/Dick Clark Productions’ “American Music Awards” in the middle of the night on Sunday, their gasp may have been loud enough to reach the Nokia Theater here in LA.

J.Lo’s boxing themed performance during the telecast showed some “ring rust." After Lopez danced up a human staircase of her dancers’ backs, she made a small crash landing on her well documented backside. (At left, Lopez gets ready to “tumble” with boxing icon Michael Buffer; all photos Getty Images.) Producers edited out the fall in the west coast version. In the end, only singer Taylor Swift was burning the midnight oil in blighty, accepting an award via satellite at 3:25 AM local time.
Country Male Artist winner Keith Urban admitted that Sunday night marked the first time wife Nicole Kidman witnessed one of his award show wins in person. 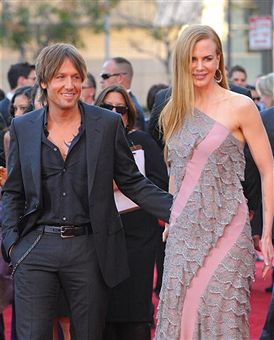 Janet Jackson struck the now-mandatory “This is It” Jackson family pose during her show-opening medley of greatest hits. The AMA’s marked Jackson’s return to the Nokia stage under much different circumstances than her last visit. Jackson had joined sisters La Toya and Rebbie to greet the “overflow room” of ticket winners following the memorial service at Staples for Michael Jackson on July 7. 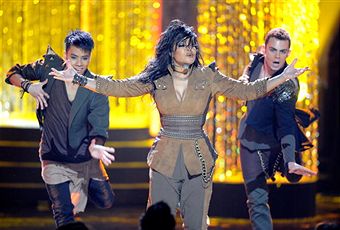 Ex-American Idol judge Paula Abdul followed Jackson to the stage (as a presenter to winners Black Eyed Peas) and later told TheWRAP she was proud to see so many former idols on stage — Chris Daughtry, Carrie Underwood, Kris Allen — but that she was no longer like a “proud mother” but more like a “proud relative."
Meanwhile, ABC got a taste of “Idol” on its airwaves leveraging Ryan Seacrest for double duty to both introduce Adam Lambert and provide his post performance chat. Lambert’s envelope-pushing performance — including simulated oral sex, coming out of a closet door, and kissing a male performer — drew the only applause of the night from the journalists backstage.
So far, no word on whether the family friendly exec suite at ABC joined in the cheering. However the Rated-R performance was unlikely a surprise, as producers teased the performance during the show as “the one everyone will be talking about tomorrow.”
Over 3 million viewers logged on to watch #3 online video broadcaster Facebook partner with Ustream.tv to stream the show’s red carpet arrivals. Facebook CMO Randi Zuckerberg told TheWRAP the service wants to “reach out to 300 million users world wide who don’t have access to American award shows.”
How else could Lloyds watch it’s bottom line?
##