I spoke to Steve Mikulan today, who told me that he’d only recently received a gift from his bosses to mark his landmark 25 years at the L.A. Weekly. I told him he’d only caught the same disease that’s afflicting far too many good journalists these days. He replied that he’d seen so many other layoffs that he thought he’d been innoculated.

Kevin Roderick and Marc Cooper bring us up to date on the ongoing goings-on at the L.A. Weekly, which I used to read with great joy as a source for smart, investigative journalism that almost nobody else would do. I read it less and less, as much because I’ve abandoned print as anything else. The website is not exactly a user magnet. 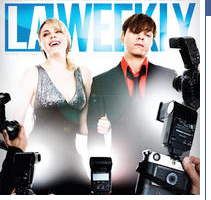 Like all print, the L.A. Weekly is struggling in a time of digital transformation. The basis of "free" alternative weeklies is, of course, local and classified ads. And – hello – Craigslist has been eating that lunch for some time. And the Weekly has had a series of layoffs to match.

So I was dismayed to read that Steve Mikulan, who wrote the Weekly’s metro blog and covered high-profile trials, was shown the door by the new editor, former Los Angeles Times veteran Drex Heikes.

"Mikulan was the last standing writer at the Weekly who could cover the city in any sort of rational way. He was calm and cool professional with a high skill set that ranged from theater reviewing to monitoring and reporting on city and national politics to aptly covering high-profile criminal and celebrity trials."

I can vouch for the latter. Mikulan was the only journalist in town who took an interest in the crazy Anand Jon case, besides me, who wrote about it for Los Angeles magazine last year. Mikulan covered the trial, which I barely did (was already deep in Wrap territory), and very well.

For those who don’t remember, Anand Jon was the media-hungry young fashion designer accused, and then convicted, of raping about a dozen fashion models whom he’d lured to his apartment from all over small-town America. Jon, an immigrant from India, insisted on his complete innocence all the way through; the jury and then the judge threw the book at him.

Mikulan was appropriately skeptical of the sleaziness on all sides in this case.

I digress. Cooper – blasting news editor Jill Stewart – writes that Mikulan was "the only guy who made the Weekly’s metro blog readable (the rest of it is dominated by a turbo-charged tabloid anti-city bias infused by Stewart and her ill-talented cronies). Staff Writer Christine Pelisek still does consistently good crime reporting but does not dabble with politics. Stewart now has a total monopoly on metro politics and that is nothing short of a sin for a paper that lacks credibility. Bottom line: The Weekly just axed its last credible politics writer."

The Anand Jon Verdict: Justice? An Analysis of the Case
and from Mikulan:

and the Spector trial too: Spector’s Dark Victory.