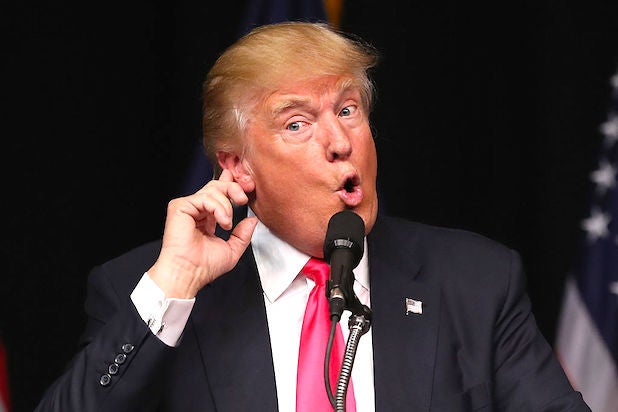 Last week, CNN’s Brianna Keilar left Donald Trump advisor Michael Cohen looking helpless as she asserted that Trump is down in the polls — “all of them.”

But in one poll, Trump wasn’t doing so badly. On the day of Keilar’s meme-ready moment, Aug. 17, the USC Dornsife/Los Angeles Times Daybreak poll had Trump at 43.2 percent and Clinton at 44.2, even as other polls had him trailing. In the week since, Trump has led Clinton for three days — according to the poll.

Conservative sites have pointed to the poll to show Trump is still in the fight. But since most other polls show him further behind, the Times’ poll is either way off — or capturing a phenomenon other polls have missed. Does the LA Times poll have a quality that makes it better at counting Trump voters?

The poll is exclusively taken online, while the majority of major polls are conducted on the telephone. This means voters being polled by the Times can say they’re voting for Trump without ever having to tell another person, directly, “I’m voting for Trump.”

Celinda Lake, a pollster not involved in the LA Times poll, is among those worried that Democratic white men may lie to pollsters when asked if they’ll vote for the Republican.

“I worry that there is a bit of a secret Trump vote,” she told the Washington Examiner. “The pattern is in the online surveys, even if you control for demographics, Trump does three to nine points better than in telephone surveys.”

In other words, Democratic poll watchers shouldn’t get cocky.

Most major polls use live-caller pollsters on the telephone. The ABC News/Washington Post, CBS News/New York Times, CNN, Evolving Strategies, Fox News, GQR/Democracy Corps, IBD/TIPP, Marist College, Mason-Dixon, Monmouth University, NBC/Wall Street Journal, Quinnipiac and Suffolk polls all use the traditional method of speaking with an actual person, according to FiveThirtyEight. As of Tuesday, Clinton led in nine of these 13 polls.

But also as of Tuesday, Trump is winning in polls by TargetPoint, Gravis Marketing, Public Policy Polling, Rasmussen Reports and SurveyUSA, according to FiveThirtyEight.

What do these polls have in common? They’re robopolls conducted by machines — and don’t require interactions with other humans.

Meanwhile, FiveThirtyEight’s data reveals that other online, Internet-based polls can go in either direction. Ipsos/Reuters, Morning Consult, Survey Monkey, UPI/CVOTER, YouGov and Zogby Analytics and the L.A. Times are conducted on the web. As of Aug. 23, Clinton leads Trump in four of the seven web-based polls.

But whether people have to talk to a human isn’t the only possible factor in poll results. The LA Times has acknowledged that “some analysts think the Daybreak poll is slightly tilted toward the Republican side because of how it accounts for the way people voted in the last election.”

“All pollsters weight their results somewhat to make sure their samples match known demographics — the right proportions of men and women, for example, or blacks, whites and Latinos,” the Times wrote. “The Daybreak poll goes a step further and weights the sample to account for how people say they voted in 2012: It’s set so that 25% of the sample are voters who say they cast a ballot for Mitt Romney and 27% for President Obama. The rest are either too young to have voted four years ago or say they didn’t vote.”

FiveThirtyEight founder and editor-in-chief Nate Silver wrote Tuesday that the poll’s weighting based on 2012 voting is “probably a mistake, because people often misstate or misremember their vote from previous elections.“

But Silver says he also likes elements of the poll, and discourages “litigating individual polls.” He says the key is looking at several polls to find the truth, and that it is “probably also harmful for the profession as a whole when poll-watchers are constantly trying to browbeat ‘outlier’ polls into submission.”

Earlier this month, The New York Times said that the L.A. Times poll has “a problem.” The NYT’s Nate Cohn feels that the 2012 weighting tilts the poll in Trump’s favor because, “People just don’t seem to report their past vote very accurately.”

The LA Times said it best when explaining its own poll in a recent article: “Unfortunately, there’s no way to know for sure until we can compare the final vote to the poll’s final forecast. Given how long it takes to count all the votes, that answer won’t be available until at least a week after election day.”