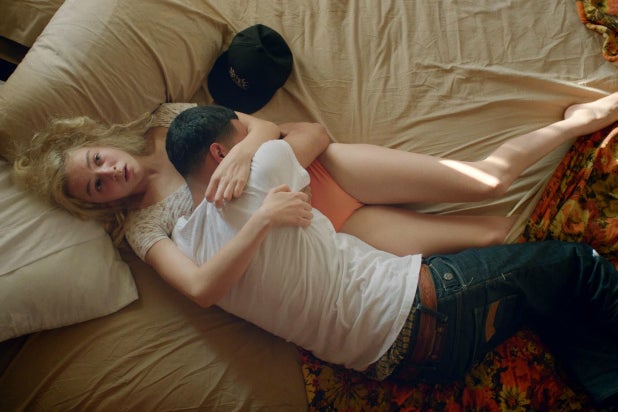 Leah (Morgan Saylor, “Homeland”), the protagonist of Elizabeth Wood’s first feature, “White Girl,” is a 19-year-old college student screwing and snorting her way through her first college summer in New York City. She works an unpaid internship at an edgy magazine by day and flirts with the drug dealers on her Queens corner by night, treating the city like it’s her oyster and she’s its flawless alabaster pearl.

With her frizzy, bleach-damaged hair, Leah isn’t an especially alluring creation, but she doesn’t need to be: She’s young and blonde and eager to please, and for the men whose orbits she enters, that’s plenty. The magazine’s editor (Justin Bartha) invites her into his office, lays out a couple of lines on his desk, and less than a minute later, they’re having sex. When she needs a lawyer (Chris Noth) and can’t afford one, she lets him take her out to dinner instead, where he wipes the red wine from his mouth like a wolf who’s just gutted a sheep.

See Video: 'White Girl' Director on Breaking Race, Gender Stereotypes: 'Women Can Have Sex and Do Drugs Too'

There’s more romance in Leah’s relationship with Blue (Brian Marc, “Nerve”), who sells drugs across the street from her new apartment. She modestly scandalizes her roommate (India Menuez, “Transparent”) by inviting him and his crew, which includes Anthony Ramos (“Hamilton”) and Ralph Rodriguez (“Chicago Fire”), up to their apartment, but intentions are pure, or at least uncomplicated, all around. Sure, it’s a little awkward when she brings three street dealers to her fancy office party, and they’re instantly noticeable because they’re practically the only people of color in the place, but then they start selling, and friendship is doled out by the gram.

Unfortunately, that temporary success gives Blue and Leah big ideas, and before long they’re in over their head, getting more and harder drugs from his menacing supplier. Then Blue gets picked up by the cops, and suddenly Leah, who’s still holding Blue’s drugs, needs to make a lot of money, fast, to pay for his legal defense. You can imagine what happens next.

The beginning of “White Girl” feels a lot like the setup for an ’80s novel by Tama Janowitz or Jay McInerney, with some of the freewheeling debauchery of Larry Clark and Harmony Korine‘s “Kids;” sure, the characters text instead of call, but apart from that there’s little to place it anywhere specific in the last couple of decades. The closest thing Wood has to a contemporary angle is the movie’s self-awareness about its protagonist’s race. “White Girl” describes the movie’s main character, but it’s also the especially potent strain of cocaine she sells to her friends. Whiteness is an addiction, get it?

The movie’s awareness — and, I suppose, writer-director Wood’s, since it’s inspired by her own experiences — is commendable as far as it goes, but it never blossoms into actual analysis, nor does it prevent Wood from making her lily-white proxy the story’s center and its only three-dimensional character. She can’t even bring herself to make Leah any worse than naive, if sometimes dangerously so, which makes “White Girl” less complex and sophisticated than an average episode of “Girls.” The movie’s Sundance contemporary “The 4th,” in which an aimless white hipster bikes around Los Angeles annoying people with his problems, was more daring in its use of an unsympathetic protagonist, but apparently lacked enough bathroom three-ways to garner the equivalent buzz.

Wood and cinematographer Michael Simmonds (“The Lunchbox”) are at their best when they’re capturing Leah’s state of mind in the midst of a bender, cranking the droning electronic score and shifting to a deep scarlet palette that makes it look like she’s drowning in blood. “I’d drink nail polish remover if somebody handed it to me,” Leah explains at one point, although what drives her self-destructive urges is never even hinted at, a move that feels more evasive than evocative.

“White Girl” wants credit for its provocations, but it’s not provoking us towards any particularly insights, just pointing out that white privilege exists and then calling it a day. It’s “Woke af: The Movie.”