No stranger to Cannes, Michael Haneke’s “The Piano Teacher”(2001) won a Jury Grand Prize, and “Cache” (2005) earned him a Best Director award. Five times nominated for the Palme D’Or, he finally won last spring for his latest, “White Ribbon,” which will be submitted by Germany in the category of Best Foreign Film for next year’s Oscars.

The film is about a rash of mischievous acts of brutality that suddenly beset a German town on the eve of WWI, all for no apparent reason. In time, it becomes clear that they are related to an oppressive power structure that tolerates no dissension. 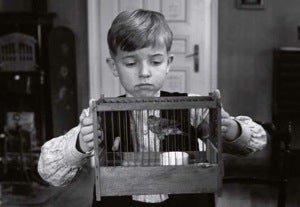 Here, Haneke talks about the dangers of oppression, education as a form of housebreaking, and standing firm against the onslaught of Hollywood.
Do you think the events depicted in “White Ribbon” are specific to German or Austrian culture, or could this type of senseless violence occur anywhere?
It’s very important to see this film in a broader context and not just related to Germany and Austria. I think I would never dare to do a film about the roots of German fascism. It’s only one example of many contributing factors.
Also, fascism is possible everywhere you have oppression, suffering, humiliation of people that can’t be alleviated through protest. These people will grab at every little straw, and so they become victims of all kinds of guidance on the right, on the left, religious direction.
Where, in your opinion, does this particular kind of malice come from?

Education, in my opinion, is to break the individual personality to make it fit into society. For example, once I learned this word in English for when dogs aren’t trained, you say, “The dog isn’t housebroken.” And this “housebroken” is a word I really like because it already contains the word “broken.” So “housebroken” means, “Now the dog is ready to live with the other ones in the house.”
All education has a little bit of this kind of break down of the liberty, the dignity of human beings. For that reason, education is a very delicate subject and I think the film is firstly about education.
But you’re not against education, are you?
I think education is always the most dangerous subject because the moment education becomes an ideology, it becomes dangerous — and it usually comes to this point.
I read a quote attributed to you: "Pornography is no different from war films or propaganda films in that it tries to make the visceral, horrific, or transgressive elements of life consumable." Can you elaborate on that?
A certain genre of action movies, even when they are very well made, are for me unbearable because they make violence consumable — and violence is not consumable. If, as a viewer, you are used to seeing violence as a consumable article, it’s dangerous. If you grow up in the presence of consumable violence, I think it’s dangerous.
You’ve talked about your movies as an antidote to the onslaught from Hollywood.
When I go to the cinema, when I’m reading a book, I will be inspired to think for myself. I don’t like books that explain to me their view of the world. I don’t like films that will explain the world to me, because it’s always a lie. A film has to be like a ski jump. The audience must be the jumper. My job is to construct a very strong ski jump for him to use, but I won’t make the jump. It’s important that the viewer has an active part. It’s not a one-way communication.
So it’s essential to raise questions for an audience to grapple with.
It’s the only honest point of view if you are writing something.
But don’t you feel audiences expect an answer?
It’s all from television. The aesthetic of education today is television. All that has evolved from the cinema went further and further down to adapt to the same level as television.
The political man gives the answers to be re-elected. The answer to a real problem is always a lie. There is no answer. If you have one question, you find an answer, you find ten other questions. Life is very difficult.
Would you consider coming here to work?
Most important for me is that I can do what I really want to do. And if people accept this and let me do it the way I want to do it — I’m not fixed in Germany or France, because I’m always doing my own thing. But if it’s not my desire, I will go to another place. I do it where I can work like I like to work.
x
Looks like you're enjoying reading