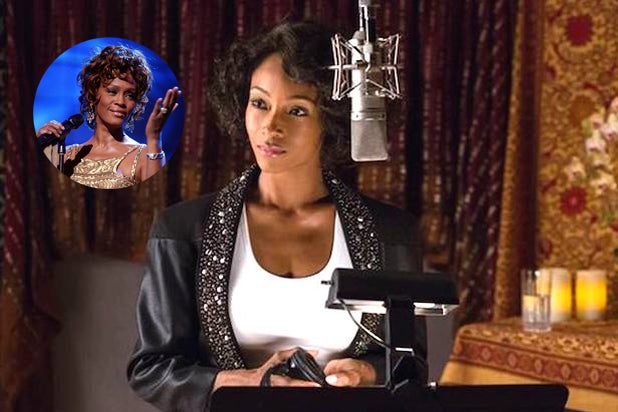 As “Whitney” began airing on Lifetime on Saturday night, celebrities including Kathy Griffin, Sherri Shepherd and leading Democrat Donna Brazile weighed in on the anticipated and controversial biopic.

Not surprisingly, the reviews were mixed.

Democratic National Committee vice-chairman Brazile was a fan, telling viewers to “tune in.”

“‘Jesus Loves Me’ was the last song she sang in public and the one she always used for her vocal warm ups,” she tweeted.

The made-for-TV movie, stars Yaya DaCosta, who was most recently seen in “Lee Daniels‘ The Butler.” The New York native got her start in showbiz as a finalist on Cycle 3 of “America’s Next Top Model.”

Here are some of the reactions:

Look here's the deal America, I will always love her. #Nojudgment #Whitney

This Whitney Houston movie on Lifetime is so bad omg #imcrying.

Who knew heroin was the downer for cocaine? #Whitney #RememberingWhitney #BobbyBrownInterview

#Whitney on @lifetimetv. If you're home, tune in. The music is already off the charts.

This #Whitney biopic is soooo much better than that #Aaliyah comedy Lifetime made.

Actor Arlen Escarpeta, who played Bobby Brown, was the target of some harsh criticism.

This Faux Eddie Murphy is almost as smarmy as the real one, #whitney

Nah I ain't down with that Eddie Murphy character #Whitney

they are making bobby a saint almost. didn't see that coming. #whitney

#Whitney and Bobby IMPACTED each other greatly. I wanted to show that their LOVE was stronger than either of them knew it could be…

On Friday, Whitney Houston‘s sister-in-law Pat Houston issued a blistering statement ahead of the movie’s premiere.

Pat, the president of Whitney’s estate, took to her official website to share key thoughts on the filmmaking process, the family’s previous comments against the film and their enduring hope for the icon’s legacy.

“Why wasn’t there a call to myself, Gary, Cissy or even her daughter? Why deny selected members of the family an advanced copy of the film? As we once again enter a season of bereavement and the strategic timing so close to the anniversary of Whitney’s death, this is a disappointment that any of us who loved her could do without,” Pat wrote.