Who the hell are the Gores Brothers, and why do they want to buy Hollywood?

As the bidding for the arthouse studio Miramax came down to the wire this week with financier-brothers Tom and Alec Gores inching closer to the prize, many in the movie business were left pondering the ambitions of these two obscure billionaires.

Their aim, say those who are close to them, is to build a major Hollywood presence. But until they snag the asset that will put them on the m 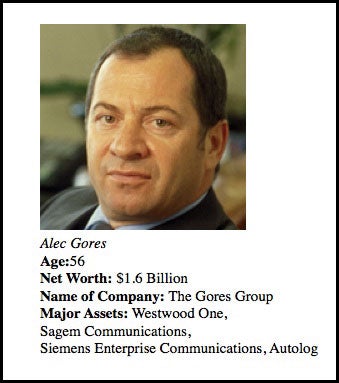 ap, they’re staying as far from view as possible.

Everyone knows their rivals Bob and Harvey Weinstein. Only too well.

But Tom and Alec Gores — 147 and 220 on Forbes’ richest Americans list, respectively — have led lives at least as dramatic as the Weinsteins, and their ambitions in the entertainment industry may be just as grand.

If they were to succeed in buying Miramax, their strategy could take them in different directions:

Will they build it into a standalone distribution company? Is their aim to create a fully functioning independent movie studio? Will they buy another platform, such as Overture, to jumpstart that effort?

And would that give Paradigm, owned by their younger brother Sam, a higher profile and key role in the industry power grid?

For the moment, all that is said by people who are connected to the Goreses is that they are in the habit of taking distressed properties and turning them into successes — most spectacularly when Alec bought the Learning Company from Mattel in 2001 and turned it around in 75 days.

They also have had juicy rivalries, leading at one point to Alec hiring notorious Hollywood private investigator Anthony Pellicano to find out if his brother Tom was sleeping with his wife.

Though, relatively unknown in studio board rooms, the Gores story is a rags-to-riches tale that could have been cribbed from a Hollywood movie.

Raised the sons of a construction company owner as Christians in Nazareth, Israel, the G 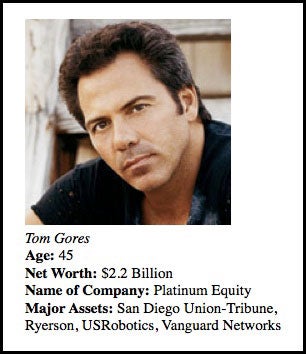 ores brothers immigrated to Flint, Michigan – now one of the country’s poorest cities — hoping for a better life.

Unlike most modern masters of finance, none have the requisite Ivy League degree.

Alec graduated from Western Michigan University, Tom went to Michigan State University, and Sam studied acting at the American Academy of Dramatic Arts after a brief stint working as a butcher.

Tom began working for Alec at Gores Technology Group, selling computers and software. They moved into telephony, and then into investing, using the leveraged buy-out mechanism.

Tom split off to build private equity giant Platinum Equity in 1995, branching into industries as diverse as steel and high-tech; Alec followed with the Gores Group.

Just last year Tom’s Platinum Equity turned its eye to the struggling newspaper industry, buying the San Diego-Tribune and emerging as one of the contenders to buy the Boston Globe from the New York Times last fall.

Alec’s Gores Group has attracted less ink in the mainstream media but has been primarily focused on leveraged buyouts of technology companies.

But their experience in Hollywood is scant. Both brothers previously owned stakes in Lionsgate, and Tom executive produced a number of low-budget, low-grossing films for Sony and Lionsgate, including "The Lost City," "Crossover" and the notorious Lindsay Lohan bomb "I Know Who Killed Me."

In these ventures, Sam, who represents stars like Philip Seymour Hoffman and Laurence Fishburne, has often provided the connective tissue between his brothers’ Wall Street ties and the entertainment world.

The brothers maintain a Kremlin-like silence about a prospective deal to buy Miramax. No representatives would even acknowledge that the brothers were in the market for Miramax, let alone Overture or Anchor Bay Entertainment, as TheWrap has confirmed.

But as leaks continued to drip out about the discussions in the inner sanctum of the Walt Disney Company over Miramax, the Gores’ intent is clear. This week they raised their all-cash bid, more than likely to the $600 million figure that Harvey and Bob Weinstein offered over the weekend.

Whatever their future plans, the Gores’ are in it to win.