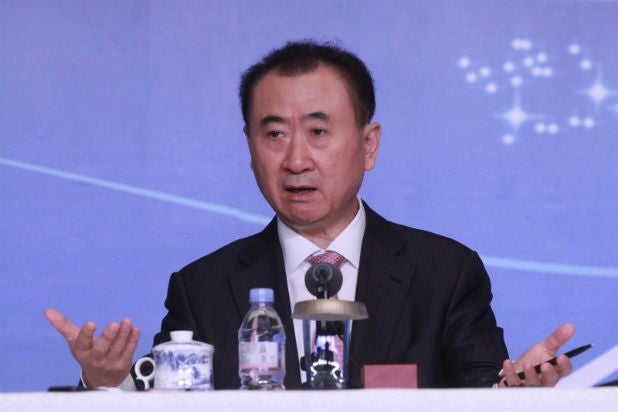 Last year, Wanda Group Chairman Wang Jianlin — China’s richest man — said he was going to take on the “tiger” of Shanghai Disneyland Park with his own “pack of wolves.” But even a wolf pack couldn’t claw its way out of a mountain of debt, making Wanda’s wannabe Disney killers the latest sacrifices to China’s regulatory crackdown.

Early Monday morning, a little more than a year after Shanghai Disneyland Park opened to the public, Wanda announced that fellow Chinese conglomerate Sunac China Holdings had agreed to buy a majority stake in Wanda’s competing theme park business, as well as 76 hotels, for $9.3 billion. And while Wanda is keeping its name on the theme parks and will continue to design and operate them, the sale is a new look for a company that has been one of the world’s most aggressive acquirers in recent years, dropping billions on assets ranging from Hollywood production companies to cinema chains to professional sports teams to yacht manufacturers — and borrowing plenty of money to make those deals happen.

Wanda sold the theme park and hotel deal as an arrangement between the two companies that would “give full scope to their respective business strengths” in a joint statement posted on its website, but an individual with knowledge of the circumstances told TheWrap the Chinese government effectively ordered the sale to prevent one of the country’s most important companies from buckling under the weight of its considerable debt.

The individual said Wanda had an “unsustainable” debt to earnings ratio as a result of its recent acquisition spree, including the purchase of AMC Theatres and “Jurassic World” production company Legendary Pictures, which Wanda acquired for $3.5 billion last year. It would be a bad look for China if one of its highest profile companies — with one of its most outspoken leaders — was to go upside down. And regulators have been cracking down: stricter currency controls helped bring down Wanda’s $1 billion bid for Dick Clark Productions earlier this year, and last month, Wanda’s stock dove after the China Bank Regulatory Commission decided to take a closer look at loans made to some of its biggest conglomerates.

“If Wanda went under, it would be an embarrassment due to the profile of the company for China, but Wang has so many enemies inside the Politburo, [the body that oversees China’s ruling Communist party] there is a strong push from some to let him go bankrupt,” the individual said. He said others who may want the company to save face think the plan could help save Wanda by making it smaller, more modest and carrying less debt.

The individual also expects Wanda to dispose of more debt-laden assets as it works to further tighten up its books. In a statement to Chinese financial website Caixin, Wang denied his company was struggling under too much debt, but acknowledged the sale would significantly reduce its leverage and allow it to continue to clean up its finances going forward.

“Wanda’s debt load at this point isn’t heavy,” Wang told Caixin. “Through this transfer of assets, our debt ratio will go down sharply. This recoup of funds will all be used to pay off loans, and Wanda plans to pay off most of its bank loans by the end of this year.”

Debt reduction may have been the primary motivation for Wanda’s decision to get off the theme park ride, but competition from Disney was certainly a factor. Wanda’s Wuhan Movie Park opened some 19 months before Shanghai Disneyland, but was forced to close for rennovations just a few weeks after Disney’s park opened. Shanghai Disneyland exceeded expectations, welcoming 11 million visitors over its first year; and even before Shanghai Disneyland was operational, people dressed as Disney characters were seen in non-ticketed areas of Wanda’s theme park in Nanchang.

And with new amusement parks from companies like Universal, Six Flags and local competitors Huayi and DMG in the pipeline — not to mention Wanda’s myriad other ventures — the government may have decided it was time for Wang to take some of his chips off this particular table. Wolves may roar, but in the amusement park business, the mouse seems to always get the cheese.