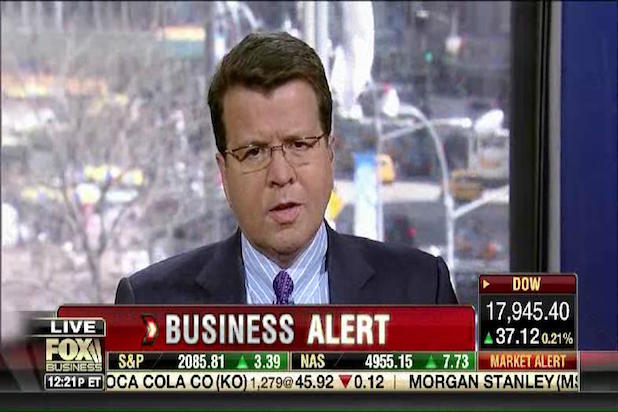 “I don’t know whether its dated back to when we had Mitt Romney on our show to talk about what he’s concerned about with Donald Trump,” Cavuto told TheWrap. “I asked Romney all the tough questions. Why are you doing this? Why now? Who are you to judge if a candidate is up to speed after you lost? All of that.”

Cavuto doesn’t know what happened but he has had a “devil of a time” getting to Trump since then. Eventually, the Trump campaign sent an email informing Fox Business that: “Neil does not treat Mr. Trump properly and he will not do the show.”

Cavuto says it was odd because he’s actually been very fair to Trump, even telling viewers not to dismiss him as a legitimate candidate last summer when he first announced he was entering the race. Cavuto has covered Trump for 30 years, and says he was a savvy businessman long before he became a reality TV star, so he’s not sure what the issue is.

“Donald Trump and his followers, whether they’re tweeting directly or retweeting, I still don’t quite understand how this stuff works, but they will hear something on the show [and take it] out of context,” Cavuto said. “Or simply assume from an interview [sound bite] that it was all negative. But Trump doesn’t want to bother with us.”

Cavuto says he is surprised that Trump is treating him like this but he still admires and respects the GOP frontrunner. Cavuto is a busy man, hosting “Cavuto: Coast to Coast” on FBN along with Fox News Channel’s “Your World” and “Cost of Freedom.” He also oversees all business shows on both Fox networks.

We caught up with the “Your World” host to discuss the rise of Fox Business Network, CNBC’s botched debate and even his thoughts on “Batman v Superman.”

TheWrap: Fox Business was the fastest growing cable network in 2015 but didn’t crack the Top 40 overall. CNN touted themselves at the fast growing Top 40 cable network – does that bother you?
Cavuto: They’ve been around forever. We’re less than a decade. To do this and see what we’re seeing, I think it’s rather remarkable. The fact is, there is no denying that we’re the fastest growing. You can slice and dice it all you want. I much prefer our trajectory than theirs.

Why do you think Fox Biz is cutting the gap with CNBC?
A lot of it has to do with, I think, “if you build it they will come.” A large part has to do with the first Fox Business debate, which provided a lot of people with a chance to try it out, to see it. I’ve always argued that, given that opportunity, people will like it and stick around. We’ve seen that happen and it was proven again with our second debate.

What did you think of the CNBC debate that the GOP didn’t particularly appreciate?
You can’t make it about you. You can’t make it about gotcha questions. You get more out of people trying to elicit responses. You don’t make yourself the story. If you do your job well, if you elicit good responses and get a debate going, you’ll look better so you don’t have to worry about the gotcha [questions]. The end result will be favorable.

How closely do you watch the debates and town halls that you’re not moderating?
I’m a geek for this kind of stuff. I see the others when they’re doing it. I’m biased but I think Fox does a better job. Having said that, I think it does a great service … you can never get enough of this stuff. Some of the most memorable moments are those that we didn’t see coming. Ronald Reagan’s famous incident in New Hampshire, when he said “I paid for this microphone,” and got his Irish rage up. That was supposedly unscripted.

What was the last movie you saw in a theater?
“Batman v Superman” and I was woefully disappointed. I’m no Hollywood reviewer but here is what bugged me about it. I went in with a large soda. Bad move. I didn’t know it was two-and-a-half hours. It took an hour to get to the point. Obviously, given the movie’s precipitous fall, it’s saying something. There is no repeat viewing. And I’m not blaming Ben Affleck. The brightest minds in the world put this thing together and this is the best they can come up with? It’s two-and-a-half hours I’m never going to get back. The idea that they would kiss and make up over having the same mother’s name is ridiculous.