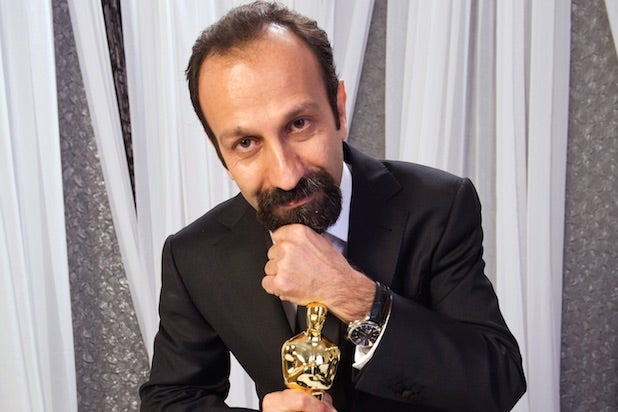 Donald Trump may be threatening Iran and banning people from that country from entering the United States, but he’s also boosting the country’s chances of winning its second Academy Award.

In the Best Foreign Language category, the award officially goes to the country of origin, not the director or producer who made the winning movie. (The director, though, gets to keep the statuette.) Iran won its first Oscar for Asghar Farhadi’s 2011 drama “A Separation,” and it’s nominated again for Farhadi’s new film, “The Salesman.”

And thanks to Trump’s travel ban, many observers of the foreign-language category both inside and outside the Academy feel as if “The Salesman” has gone from being one of the contenders in a tight race to becoming the favorite to win.

Farhadi is the most high-profile person affected by the travel ban. On Sunday, the director issued a statement in which he said that he had decided not to attend even if it were possible for him to do so.

“I know that many in the American film industry and the Academy of Motion Picture Arts and Sciences are opposed to the fanaticism and extremism which are today taking place more than ever,” he wrote. “However, it now seems that the possibility of this presence is being accompanied by ifs and buts which are in no way acceptable to me even if exceptions were to be made for my trip.”

The ban immediately made Farhadi a cause celebre in Hollywood. Within days, the Academy, the American Film Institute, the Writers Guild and the Directors Guild issued statements criticizing the executive order and decrying the treatment of the celebrated writer-director.

Unlike most recent years, in which the foreign-language race had a clear favorite from the start, this year’s presumed front-runner, Germany’s “Toni Erdmann,” is clearly vulnerable to a challenge from any of the other four nominees: “The Salesman,” Sweden’s “A Man Called Ove,” Denmark’s “Land of Mine” and Australia’s “Tanna.”

And now, voting for “The Salesman” has become the Oscar equivalent of donating to the ACLU or using Lyft instead of Uber — a way to make a statement against the travel ban, and against the Trump administration in general.

In a year without a clear favorite in the category, that could prove to a huge, maybe even a deciding, factor.

If it does, though, there’s not much clear precedent for offscreen political considerations like this impacting an Oscar race to this degree.

Some documentaries that have won at least in part because of their subject matter — “CitizenFour,” “An Inconvenient Truth,” “Taxi to the Dark Side” in recent years — but those didn’t get votes because of anything that happened to or with their directors off screen.

And even though Michael Moore’s win for his gun-control documentary “Bowling for Columbine” in 2003 may have had something to do with his relentless criticism of President George W. Bush, who was distinctly unpopular in Hollywood, Bush’s invasion of Iraq didn’t begin until the week the Oscars took place, after voting had concluded.

(And Moore’s subsequent anti-Bush film, “Fahrenheit 9/11,” wasn’t nominated for anything, though that was probably his fault for not entering it in the documentary category and pushing instead for Best Picture.)

In the Best Foreign Language Film category, ideology and political statements don’t often appear to factor into the voting. The recent string of winners, beginning with Farhadi’s “A Separation” and continuing with “Amour,” “The Great Beauty,” “Ida” and “Son of Saul,” run a gamut but are notable mostly for the quality of their filmmaking.

The closest thing to the current situation may have occurred in 1982, when Polish director Andrej Wajda’s drama “Man of Iron” was nominated. The film dealt with the Solidarity labor movement, and was made during the brief thaw in Communist censorship in Poland in 1980 and ’81. But when the government imposed martial law in December 1981, it also banned the film — and the newly repressive government attempted to retroactively withdraw it from Oscar consideration after it received a nomination.

The Academy refused and kept “Man of Iron” on the ballot, where some thought its chances would be boosted by the publicity and the possibility of using the vote to make a statement. But the film lost to Hungary’s “Mephisto.”

Farhadi has also been caught in political firestorms around the Oscars before this year. When “A Separation” won, he told TheWrap earlier this season, “The people were so happy, because they felt that somebody who was one of them had been given this prize. But there are also some radical people who were quite angry. They’re not many, but because they’re protected by the system, their voices are loud.

“There is a certain minority that imagines that any time a film receives an award in Cannes or Berlin or a world festival, there’s a conspiracy behind it. Their take is, ‘Because they said the film is good, then the film is bad.'”

When TheWrap screened “The Salesman” the week after the presidential election, though, he told a happier Oscar story. The day after he won for “A Separation,” he said, he went back to Hollywood Blvd. to see what that street looks like when it’s not Oscar night. There, he was stopped by an Iranian tour-bus operator who began weeping when he spotted the filmmaker.

“He said that he rarely told the tourists that he was Iranian, because they would be afraid to get on his tour bus,” Farhadi said. “He would just say some other country. But he said, ‘Starting today, when your film got the Oscar, now I’m going around telling everybody that I’m Iranian.'”

Farhadi concluded, “So cinema is something that can erase these fears that are fake fears.”