The last movie Andrew Whitehurst worked on before serving as visual-effects supervisor on Alex Garland‘s “Ex Machina” was a little James Bond production called “Skyfall.” The Bond film had a budget more than 10 times as big as Garland’s story of two men and a comely female robot, which makes the achievement of “Ex Machina” even more remarkable; on a relative shoestring, Whitehurst and his crew at Double Negative created a film in which the lead character, played by Alicia Vikander, is a believable cyborg named Ava.

The $15 million film also has by far the lowest budget of any of the 10 movies on the Academy’s VFX shortlist, where it is facing off against the likes of “Star Wars: The Force Awakens,” “Avengers: Age of Ultron,” “Jurassic World” and “The Martian.”

“This was massively different in scale from ‘Skyfall,’ but that can be as much of a good thing as a hindrance,” Whitehurst insisted. “The greater the financial constraints you have, the more it encourages everybody to work together.” 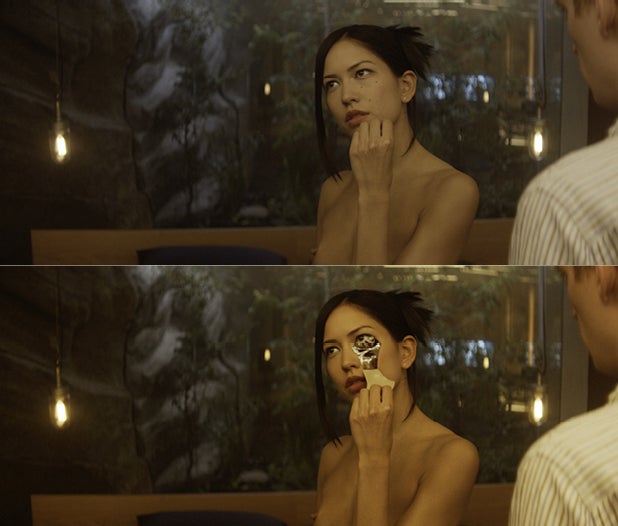 The result was extensive collaboration between teams: “One example is that Ava has these sort of rubber O-rings around her ankles and wrists, with brass stubs on them. We asked for them to be put there, because they were able to help us track Alicia’s movements when we were adding the CG in post-production.”

The key, he added, was simple: “What is gonna give Alex the biggest bang per buck on screen? But tracking Vikander’s movements wasn’t always easy, particularly when she was barely moving.

“There’s a lot of time where she appears not to be moving at all,” he said. “But human beings are never not moving, and it’s much easier to copy the movement of something very action-centric than something very subtle. That was the single hardest thing we had to do.”

As the before-and-after photos show, Vikander delivered her performance clad not in the usual greenscreen leotard, but in a sleek gray suit similar to what is seen in the finished film. “There was a very conscious decision not to go with the green-bodystocking-covered-with-markers look,” he said. 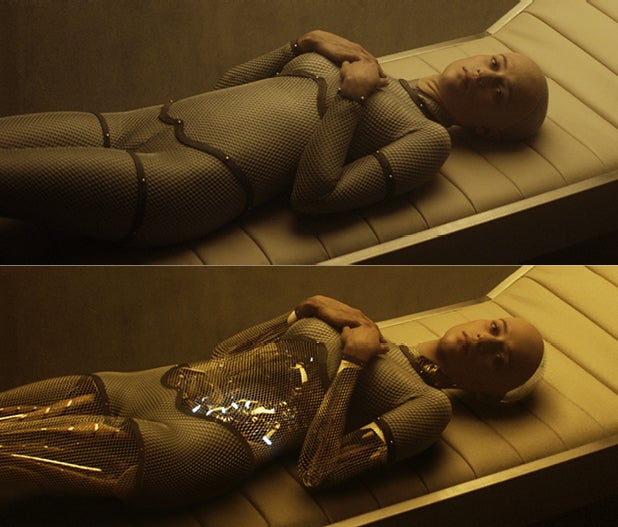 “Fundamentally, the film is a series of conversations — and for the conversations to work dramatically, you need to have two actors who are able to fire off one another, and you need to allow the camera department to shoot it as they would any other dialogue scene.

“We felt that the less weird and distracting we could make what Alicia was wearing, the better for her and for whoever is acting with her.”