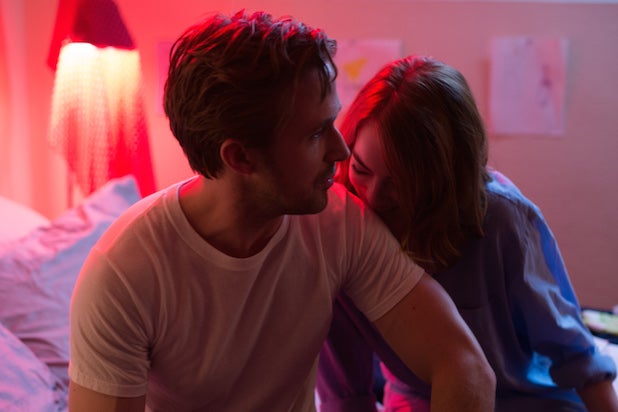 As soon as it premiered at the Venice International Film Festival last September, “La La Land” became the odds-on favorite to win the Oscar for Best Picture. Five months later, after its victories at the Producers Guild and Directors Guild Awards and the Golden Globes and BAFTA and its record-tying 14 Oscar nominations, it’s an even bigger favorite.

But that means it’s also the subject of incessant sniping. It’s a movie about Hollywood, some say, and we’re sick of the Academy always rewarding those. Or it’s a movie about white people in a year where we’re trying to make strides in diversity. Or it’s an escapist movie at a time when we need movies about reality.

But none of those complaints really speak to the quality of Damien Chazelle’s vibrant, joyous but also melancholy and nuanced musical. And none of them can rewrite the history of how it was received when it first earned that spot as Oscar favorite.

I think back to when people first saw “La La Land” in Venice, and TheWrap’s Alonso Duralde called it a “sparkling cinematic love letter.” Or when I first saw it in Toronto and wrote, “‘La La Land’ is something special, a lovely and touching concoction that simultaneously embraces the dazzling form of old Hollywood musicals while simultaneously admitting that musical fantasies are sort of a con.” Or when it began screening in Los Angeles, and one Academy member after another told me how much they loved it and how it was definitely going to win.

And I know that the movie hasn’t gotten worse since then — it’s just gotten a bigger and bigger target on its back. A friend in the Academy called me last week and complained that it was going to win — and when we got off the phone, I pulled up an email he sent me a couple of months ago, in which he told me how shocked he was to find that he really liked “La La Land,” and how nothing could beat it for Best Picture.

Sure, it clicks a few obvious boxes for Best Picture voters, but nothing about “La La Land” suggests that it was engineered to win awards. It was a passion project, pure and simple, as was “Moonlight” and “Manchester by the Sea” and “Arrival” and “Hidden Figures,” very good movies one and all.

I stand in its corner as someone who often has a tough time with musicals. I couldn’t take “Les Miserables” or “The Phantom of the Opera,” was left cold by “Into the Woods,” didn’t like “Dreamgirls” or “Jersey Boys” and loathed “Mamma Mia!” But when musicals work — and in recent years I’d put “Moulin Rouge,” “Once,” “Chicago,” “The Muppets,” “Sing Street” and “La La Land” in that category — they can be a thrilling, heightened form of cinema that can be uniquely satisfying.

“La La Land” is glorious and exuberant and melancholy at the same time; it gives you the happy ending you want, and then it forces you to acknowledge that the happy ending is a fantasy, and that rueful acceptance tinged with regret is as good a reality as you’re going to get.

It has the guts to ask you to surrender in the first seconds, throwing a ridiculous song-and-dance number on a gridlocked L.A. freeway at you before the opening credits and then insisting that the number can be an overture to a movie about dreams that don’t quite come true.

It is bold enough to cast leading actors whose charm and charisma have to compensate for not-ready-for-Broadway vocal chops, and you know what? I’d rather be beguiled by Ryan Gosling’s limited singing range but effortless charm than blown against the back wall by the stage-honed exertions of Hugh Jackman in “Les Miz.” No, Ryan and Emma aren’t Gene Kelly and Debbie Reynolds, but who says they have to be? George Clooney isn’t Cary Grant, either, and if you need him to be then I suggest that you stick to Turner Classic Movies and stay out of the multiplex.

(And if TCM happens to show “The Umbrellas of Cherbourg” some day, take a gander at another musical with nonprofessional singers and a melancholy bent.)

The worst thing about the backlash, I think, is that it puts me in the default position of defending “La La Land” against perceived shortcomings rather than celebrating it as a fresh and delightful cinematic concoction that is going to win Best Picture because it’s loved, honestly and for perfectly good reasons, by more people than its rivals.

Sunday’s Los Angeles Times included a group interview with Chazelle, “Moonlight” director Barry Jenkins and “Manchester by the Sea” director Kenneth Lonergan. At one point Lonergan, a fearsomely incisive chronicler of human behavior and a gifted playwright and director, had this to say about “La La Land”:

“[T]he last sequence — the what-could-have-been sequence — just blew me away. I don’t know how [Chazelle] conceived it, executed it or edited it. It’s a completely different approach to emotional reality. Sometimes when you see a musical that’s really good, you’re just like, ‘Everything else is like nothing compared to this.’ It just takes you to somewhere you can’t go in any other way.”

And that, in a nutshell, captures the essence of what Damien Chazelle achieved: He took the audience someplace we can’t get to any other way.

Look, if I had a ballot, I might not even put “La La Land” at the top — I might well list “Manchester” first. But I’d put “La La Land” second, where I’m sure the preferential ballot will eventually give it my vote. And I’ll be happy when it wins.

Backlash be damned, this is a Best Picture choice that needs no apologies.