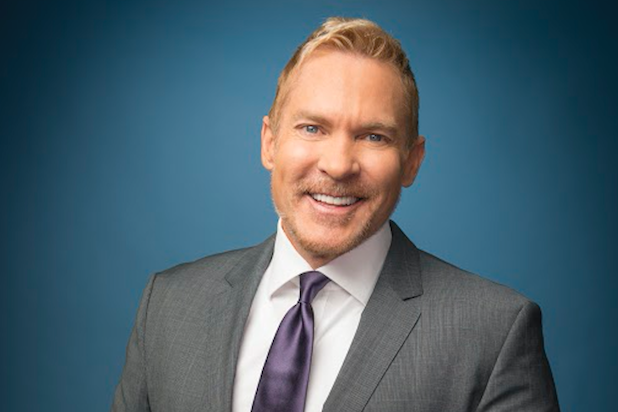 Sam Champion says his new talk show will feature people who are “passionate about climate, the environment, science, weather, even technology.” However, don’t expect too many A-list Hollywood stars to appear on the program.

“We’re going to talk to people who do the work,” Champion told TheWrap. “We’re not concentrating on celebrity voices.”

“23.5 Degrees with Sam Champion” premieres on The Weather Channel on Tuesday at 11 p.m. ET/ 8 PT. The debut episode will focus on the water crisis in Flint, Michigan.

“There are a few celebrities, believe it or not, who make the list of people who actually do the work,” he said.

Champion said he has not reached out to Leonardo DiCaprio, who recently impressed the former “Good Morning America” host by using his acceptance speech at the Academy Awards to tout climate change.

“I thought it was absolutely amazing. If you follow Leonardo DiCaprio on any of his platforms, you get what he cares about,” Champion said. “It’s huge for someone to do that.”

The veteran weather guru appreciates when a celebrity wants to help, but feels too many are self-serving, especially on social media.

“When you get an actor or actress who uses their platform for everybody’s benefit, instead of taking pictures of their coffee order or their face cream regimen, you’ve got to respect these people,” Champion said.

Champion thinks we “need more and louder voices from Hollywood” when it comes to climate change.

“I think that anyone in a leadership or a high-profile position needs to be taking on the topics of clean air, clean water, rebuilding our infrastructure and strengthening the laws against people who pollute,” Champion said. “It’s a great social concern for us. I would love for [climate change] to truly be topic No. 1 for Hollywood.”

Champion explained that his show isn’t for you if you want to hear about Hollywood gossip and admits there “is no doubt” that Leo is the loudest voice but the purpose of his program is to educate viewers.

“This wasn’t a Hollywood-driven show. When we’re sitting here planning who we wanted to talk to, I didn’t think ‘oh, let’s pick up the phone and call Leonardo,'” Champion said. “If you turn on 23.5, you’re going to hear from the scientists who discovered the bacteria and the viruses that are being exposed to the planet for the first time as sea ice melts.”

Even the title of the show educates, as it refers to the tilt of the earth’s axis.

“Because the earth it tilted, and wobbles, we have uneven heating on the planet, which means we have seasons,” Champion said. “Twenty-three-point-five degrees is what makes this planet habitable.”

Champion’s 30-plus year career includes plenty of interviews that were trimmed down for television purposes, with 20-minute interviews often edited to roughly one minute of airtime.

“It’s frustrating for a journalist who loves the conversation and really wants all angle of a personality and a topic to come through,” Champion said. “To do a long-form interview show is a dream of anyone who actually cares about talking to people.”

Champion says the show will feature interviews anywhere seven to 20 minutes long and will be face-to-face whenever possible but there might be some Skype, “because that’s the way the world runs.”

Champion is sick of people asking if he misses co-hosting ABC’s “Good Morning America,” because he has exactly what he wanted when he left, which is to create content built around weather.

One of the major priorities for the managing editor is finding ways to make The Weather Channel content relevant to watch on demand or via DVR. Champion expects the long-form interview concept of “23.5 Degrees” to do just that.

“I built the show to not be a one-topic show,” Champion said “I know people will DVR it if they find the topics interesting.”