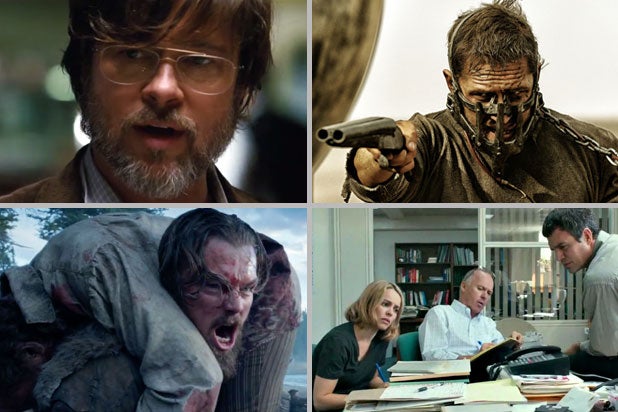 Sorry, Oscar watchers. It’s mid-January, and we don’t know much in the most wide-open awards race in years.

But don’t worry: By the end of the week, we will.

That’s because Saturday is the Producers Guild Awards, the most reliable predictor of Oscar success. This year in particular, it’s the one event that that should tell us, after five months of film festivals, screenings, Q&As, campaign ads, critics’ awards, guild nominations and awards shows, the real frontrunner for Best Picture.

At the moment, that trophy could conceivably go to “Spotlight,” “The Revenant,” “The Big Short” or “Mad Max: Fury Road.” One of those will likely win the top honor from the PGA, the only one of the major guilds that has a de facto 10-film Best Picture category, and the only one that counts its votes using the Academy’s preferential system.

Since the Academy and the PGA expanded from five to 10 nominees, and both bodies went to the preferential system, no movie has won the Best Picture Oscar without first winning the top Producers Guild Award.

The PGA, which was thought to be biased in favor of big moneymakers, was the group that made it clear that the little film “The Hurt Locker” was going to knock off the blockbuster “Avatar” in 2010; that all the critics’ awards on Earth weren’t going to make “The Social Network” an industry favorite over “The King’s Speech” in 2011; that “The Artist” was loved by the industry it depicted in 2012; that “Argo” was riding the groundswell of sympathy for its Oscar-snubbed director Ben Affleck in 2013; and that “Birdman” was going to beat critics’ favorite “Boyhood” last year.

The only wrinkle in the PGA’s otherwise-perfect record came in 2014, when Oscar winner “12 Years a Slave” tied with “Gravity” for the Producers Guild Award. The deadlock was a rather astonishing occurrence considering how hard it is for the preferential system to produce ties (and how easy it is for its accountants to break those ties, something the Academy insisted they would do if it came to that).

But it also suggested that if “12 Years” had the strength to tie with “Gravity” among a group of voters who’d presumably be more favorably disposed toward the latter, the dark drama would go all the way with the broader body of Academy voters.

Also Read: Golden Globes: Who Really Won (Even if They Didn't)

So more than the SAG ensemble award, which honors a specific part of the film, or the Writers Guild Awards, which have far different eligibility requirements, or the DGA Award, which corresponds more closely to the Oscars’ Best Director honor, the Producers Guild Award will likely be the key to clarifying a confusing year.

“Spotlight,” which won the Golden Globe and the Critics’ Choice Award and more critics’ awards that any other film, needs a PGA win to show that it can triumph when the voters are film-industry professionals rather than journalists.

“The Revenant,” which has come on strong in the last couple of weeks, needs to show that a huge, undeniably impressive but somewhat divisive film can forge the broad consensus necessary to triumph under the preferential system, which looks for the film that’s most liked by the entire body of voters.

“The Big Short,” which has also proved to be a surprise favorite since its December debut, needs the PGA to push it from surprise nominee to real contender.

And “Mad Max: Fury Road,” which could well walk away from the Oscars with more statuettes than any other film, needs to show that its support isn’t just among critics and below-the-line voters.

Realistically, there’s one other conceivable outcome: “The Martian,” which took a seemingly fatal blow when Ridley Scott was bypassed for a nomination by the Academy’s Directors Branch, could pull an “Argo” and use the perceived snub to gain momentum for a Best Picture push.

The Academy sent mixed messages in its nominations last week: “Spotlight” and “The Big Short” received Best Film Editing nominations, crucial signs that they’re real contenders, while “The Revenant” and “Mad Max” weren’t singled out for writing, a nomination that usually goes hand-in-hand with a Best Picture win. But “The Revenant” and “Mad Max” easily led the field in total nominations, with 12 and 10, respectively, to only six and five for “Spotlight” and “Big Short.”

There’s no precedent for this many films with a legitimate chance of winning this late in the race during the 10-nominations era — though you could say that 2001 was comparable, when “Gladiator,” “Traffic” and “Crouching Tiger, Hidden Dragon” were all potential winners in a five-film field going into the Oscar weekend.

Then again, “Gladiator” had already won the PGA that year, so maybe we should have known it would also triumph at the Oscars.

Oh, by the way: It’s possible that the Producers Guild won’t be as much of help this year as it has been in the past. Because, you know, it’s been that kind of year.