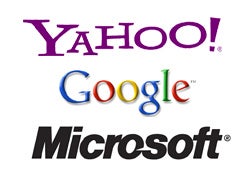 After a year of on-again, off-again, “Will it happen?” talk — something, as Computerworld’s Eric Lai aptly put it, that’s grown as “tiresome as the annual Brett Favre retirement watch” — Microsoft and Yahoo finally struck a search deal today, effectively making the former’s month-old Bing the world’s number two search engine … albeit a distant number two, behind Google.

It was relatively fascinating to listen to Ballmer and Co. walk the tightrope between touting the scale of the partnership for users and advertisers and defending it against the inevitable antitrust scrutiny of the Justice Department by pointing out how dominant Google is — while simultaneously trying not to say the word “Google.”

8:33AM ET: She says it will enable Yahoo to focus on its “vision” — that is, to “be the center of people’s lives online.”

8:35AM ET: Bartz fires back at critics who say the deal means Yahoo is effectively giving up on the search business: “Search will continue to be an integral part of the Yahoo user experience.” She makes this point multiple times during the call.

8:41AM ET: Ballmer says the deal will offer “real consumer choice” and advertisers a “strong number two player” in search.

8:42AM ET: Ten minutes in, and, despite the heavy inferences, “Google” has not been uttered once.

8:43AM ET: The deal will “help the industry as a whole prosper,” Ballmer says. “We are super-excited.”

8:48AM ET: Bartz warns that as a result of the deal, Yahoo’s revenues will “come down a bit” but that the company will save $200 million a year.

8:50AM ET: When asked about anti-trust issues, Ballmer says, “We would expect the competition to be aggressive.” Clearly, Bartz and Ballmer are trying not to say “Google.”

8:51AM ET: Ballmer says “obviously, we will be called on to present that case in D.C. and Brussels.”

8:57AM ET: Finally, counsel for one of the companies blinks and says “Google”: “They own 70 percent of the search — I don’t know of any instance of a company with that marketshare opposing two (smaller) companies coming together. But they’ll make their decision. We look forward to the debate.”

9:10AM ET: Ballmer himself says “Google” while defending the Microsoft and Yahoo’s combined search share as a “clear alternative choice for advertisers.”