We’re introduced to the sweet-faced dachshund star of the mordantly funny “Wiener-Dog” as she waits patiently, in a cage, for whatever might come next. No cushion to get comfortable on, she awkwardly shifts her weight on the metal grid, never finding her footing.

In any other context, the adorable pup’s next station in life would be that of happy adoptee, sentenced to cuddles, petting and Instagram likes. Unfortunately, this charming, ergonomically challenged dog is the subject of a bleak comedy from Todd Solondz (“Happiness,” “Welcome to the Dollhouse”), a filmmaker whose work never fails to dive deeply into the unhappiest corners of human experience.

Solondz’s most famous character, bullied middle-schooler Dawn Wiener from “Dollhouse,” whose suicide he documented in 2004’s  “Palindromes,” finds a second shot at life here (played by Greta Gerwig). So does Dawn’s cruel childhood nickname, “Wiener-Dog.” It’s used both on Dawn and the dachshund, and the pain of existence transfers from human to dog, from dog to human, a circle endlessly looping itself.

Though no animals were harmed in the making of this film, the canine star witnesses suffering and is subject to it herself in ways few screen animals have since Robert Bresson’s 1966 masterpiece, “Au hasard Balthazar.” In interviews, Solondz has named both “Balthazar” and 1974’s “Benji” as reference points. But while the latter’s buoyant mutt is his town’s unofficial mascot, his shaggy friendliness turning to active heroism as he rescues a pair of kidnapped children, it’s Bresson’s doomed donkey Balthazar, passed from one miserable ownership scenario to another, whose life most closely resembles this film’s innocent animal. 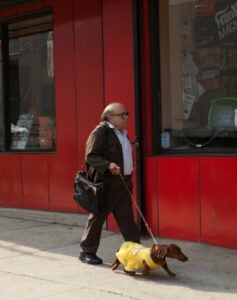 First, she’s adopted by a brittle couple (Julie Delpy, Tracy Letts) and given as a pet to their young son (Keaton Nigel Cooke), a cancer survivor. On the surface, it seems like she’s hit the rescue jackpot. The family lives in a serene-looking home straight out of the pages of Dwell magazine. Of course, almost immediately, she’s subjected to the stress and neuroses of the uptight rich. The son, baffled by his parents’ approach to dog training (“You have to break a dog’s will so that it acts like a human,” they tell him), indulges the hapless animal with treats until he sickens it.

In Solondz’s hands, this is an opportunity to trust acclaimed cinematographer Edward Lachman (“Carol”) to create the film’s most memorable scene: a long, slow dolly shot of a seemingly endless trail of dog diarrhea. If you think this is disgusting, hilarious and simultaneously heartbreaking, you’re ready for the rest of the movie.

An atheist’s inverse Balthazar, Wiener-Dog witnesses and experiences suffering but cannot transform that pain into anything substantive, nor can she redeem those around her. Resurrected with each new owner, the most she can do is give sporadic moments of comfort to her ruined human chaperones. Abandoned in a clinic by the rich family, she’s rescued by veterinary assistant Dawn Wiener and taken cross-country with Dawn’s former childhood tormentor Brandon (Kieran Culkin).

They’re not going anywhere, exactly, but wind up at the home of Brandon’s brother (Connor Long) and sister-in-law (Bridget Brown), both of whom have Down Syndrome, and who welcome “Doody” (as Dawn has re-named the hound) with open arms. Later, the dog lives with a depressed, has-been screenwriter (Danny DeVito), who teaches the subject to unreceptive college students. (They take cruel pleasure in mocking his tradition-minded professional mantra, “What if? Then what?”) Doody’s final custodian, a bitter, elderly woman (Ellen Burstyn) with an opportunistic granddaughter (Zosia Mamet), renames her “Cancer” for no apparent reason beyond pure meanness.

Through it all, the dog stays in the picture, taking life as it comes, willing to follow whoever picks up her leash. Solondz’s ongoing concern with identities and their shifting nature allows him to connect Wiener-Dog to earlier film iterations of animal saviors (see also: Disney’s 1963 live-action fantasy “The Three Lives of Thomasina” and its themes of atheism, reincarnation and spiritual redemption) but also to negate the trope of pets who bestow grace. His main character is a mute, innocent and ultimately ineffectual blank of a dog. His humans have to save themselves.

Not that he’s interested in making it easy for them to do so. Often accused of glib misanthropy, Solondz’s films make little effort to combat the charge, often seeming to invite it as the writer-director denies his characters anything resembling an easily accessed emotion. He’s allergic to catharsis, and his deadpan scouring of abject interior lives — beautifully framed by Lachman’s clean, direct approach, darkness exposed to fluorescent brightness — leaves no room for false hope.

Yet in this midst of this collective existential crisis, Solondz’s tendency to reiterate themes, his films’ frequent repetition of loveless characters, their cruel gestures, their deaths, loneliness and failure, serves only to expose his underlying empathy. In Burstyn’s sequence, a vision of her childhood self mimics DeVito’s stock teaching tool and asks her, “What happened to you? What if you had learned kindness? Self-love? Forgiveness?”

There’s nothing cynical or misanthropic about those questions. But there’s also no answer. No “then what?” And the dog has nothing to add to the conversation. She’s happy to be out of that cage. Everybody else has to fend for themselves.