Submissions are being accepted for the Women In Film Foundation’s Film Finishing Fund (WIFF FFF), which supports films by, for and about women by providing cash grants of up to $15,000 and in-kind donations such as production services.

Since launching the FFF in 1985, the WIF Foundation has awarded more than $2 million in cash and in-kind services to 170 films.

For the second year, the fund is sponsored by Netflix, which provides cash grants and meaningful consultation regarding distribution to filmmakers. 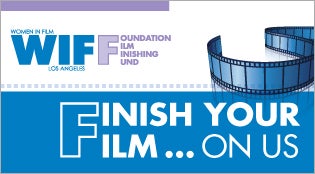 Cash awards range from $1,000 to $15,000, with the number of grants varying from year to year. The in-kind grants may include post-production services, such as online editing, sound mixing, color correction and closed captioning.

"Netflix is proud to be supporting the work of talented women filmmakers who have to overcome many hurdles to see their projects through," Cindy Holland, VP of content acquisition, said in a statement.

2008 Oscar-winning documentary short "Freeheld," a 2007 grant winner, is among FFF’s recent success stories. Director Cynthia Wade said in a statement, "Women in Film came in at a critical point. The Film Finishing grant was a vote of confidence — it’s lonely as an independent filmmaker. Unless you have the resources, the film is only as effective as the audience you can reach. I’m grateful to have the understanding that women filmmakers need to be supported."

The program funds filmmakers working in both short and long formats in all genres. Filmmakers do not have to be members of Women In Film to apply for the FFF, and the organization encourages applications from around the world. Student projects are not eligible, however.

Eligible filmmakers may find more information and apply at www.wif.org/fff.