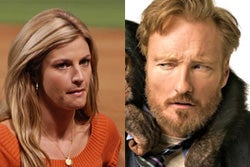 In New York, the Erin Andrews’ peephole story just won’t go away, even when it comes off the front page.

Yesterday, ESPN announced a wholesale ban on New York Post reporters from appearing across its shows after the paper ran stills from the now-infamous video of the sideline reporter nude in a hotel room.

"While we understand the Post’s decision to cover this as a news story, their running photos obtained in such a fashion went well beyond the boundaries of common decency in the interest of sensationalism," ESPN said in a statement Wednesday night.

Question: Has ESPN ever read the New York Post? That’s practically its mission statement — at least for the front page.

The story — on the front page of the Post Monday and Tuesday – was bumped from the cover Wednesday in favor of “JACKO DEATH RAID,” the killing of Bin Laden’s son and a six-game New York Yankees winning streak.

Meanwhile, the boundaries of common decency were pushed last night on the "Tonight Show," when Conan O’Brien used the peephole incident as fodder for a monologue bit.

The Disney-owned sports network has yet to reference the Andrews case on its signature show, "Sportscenter."

And it isn’t the only controversial sports story the self-proclaimed "Worldwide Leader in Sports" has avoided reporting this week. Until Wednesday, ESPN had been shockingly silent on the sexual assault case involving the reigning Super Bowl champion quarterback Ben Roethlisberger — a story that broke on Monday.

ESPN news director Vince Doria said that because the allegations were made in a civil lawsuit, the network exercised caution and did not want to harm Roethlisberger’s reputation. “Damage to his reputation is not our only criteria,” Doria told the New York Times, “but it’s the driving force in making this decision.”

Roethlisberger is scheduled to tape an episode ABC’s upcoming "Shaq Vs." — a reality show pitting NBA star Shaquille O’Neal against other star athletes in their respective sports — on Friday in Pennsylvania.