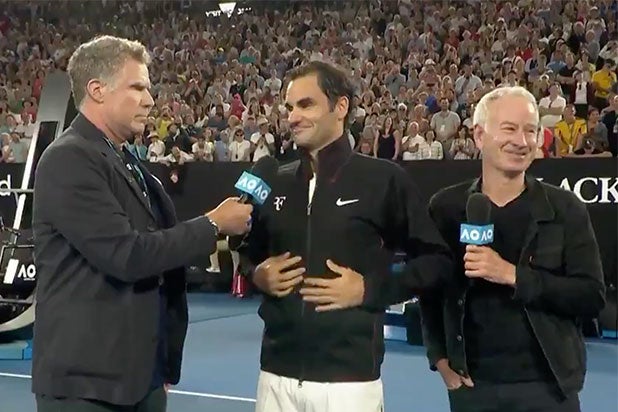 Roger Federer was in for quite a surprise when Will Ferrell stepped onto the court of the Australian Open tennis tournament on Sunday and started interviewing the tennis legend as his “Anchorman” character Ron Burgundy.

“In the immortal words of Ron Burgundy, it’s great to be here with two tennis legends, Roger Federer and John McIntosh,” Ferrell said.

He then went on to ask Federer a series of bizarre questions, including whether he would describe his game as a “silky gazelle,” and whether Federer was a witch or a vampire.

During the interview, Ferrell also asked the tennis player whether he eats wombat to stay fit.

“Does it get annoying when they scream, ‘Come on, Roger!’ over and over again?” Ferrell asked.

“They remind me of my own name,” Federer joked in response to Ferrell’s question about the audience.

And of course, Ferrell had to sign off in classic Ron Burgundy fashion: “Stay classy, Melbourne!”

“Anchorman: The Legend of Ron Burgundy” became a cult hit after it was released in 2004, and starred Ferrell in the role of a top-rated newsman in San Diego. A 2013 sequel grossed more than $176 million domestically.

"Roger, would you describe your game as a silky gazelle?"