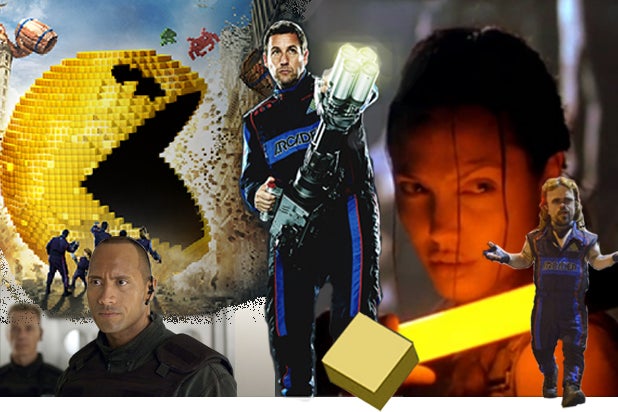 “Pixels,” Sony’s Adam Sandler vehicle about aliens that attack Earth in the form of 1980s-era video games, faces stiff competition this weekend from holdovers like “Ant-Man” and “Minions” and newcomers like “Southpaw” and “Paper Towns.”

But the biggest challenge for the $85 million production — which was tracking for a $58 million opening that has since been revised down to $25 million — may be overcoming its stigma as a video game adaptation.

Over the years, the genre has consistently underperformed at the box office. For every success story like “Tomb Raider” with Angelina Jolie or “Resident Evil” with Milla Jovovich, there have been more than a dozen misfires from 1993’s “Super Mario Bros” to 1999’s “Wing Commander” to last year’s “Need for Speed” with Aaron Paul, which grossed $44 million domestically on a budget of $66 million.

Despite the huge popularity of the first-person shooter “Doom,” the $60 million movie starring Dwayne “The Rock” Johnson grossed a disappointing $55 million during its theatrical run in 2005.

“You would think that with the incredible global popularity of video games and the billions in revenue that the sector generates, that movies devoted to the category would thrive in the theatrical marketplace,” Paul Dergarabedian, senior media analyst for Rentrak, told TheWrap. But that hasn’t proven to be the true.

Even successful video-game films have not lived up to expectations. Jake Gyllenhaal took on the lead role in the 2010 adaptation “Prince of Persia: The Sands of Time.” The $200 million potential tentpole grossed $336 million globally, but only $90 million of that came from the North American theaters. Sequel plans quickly evaporated.

“There’s a definite disconnect between gamers and moviegoers,” Exhibitor Relations senior analyst Jeff Bock told TheWrap. “Games are more fun to play than to watch. In the video games, you’re the stars. Watching a movie, you’re just part of the crowd.”

Only time will tell if “Pixels” is able to break the streak. When the first trailer launched in March, it became the No. 1 trailer for Sony of all time, generating 34.3 million views worldwide in its first 24 hours online.

The film does have some things working in its favor, including stars like Adam Sandler, Kevin James, and “Game of Thrones” standout Peter Dinklage.

And like Disney’s 2012 animated hit “Wreck-It Ralph,””Pixels” is not a direct adaptation of any one game but features classics like Pac-Man, Galaga and Donkey Kong in a spoof-like vein.

Whether or not “Pixels” succeeds where other video game-inspired movies have failed, studios show no signs of shying away from cashing in on the gamer craze.

Next year will bring both 20th Century Fox’s “Assassin’s Creed” with Michael Fassbender and Marion Cotillard as well as Universal’s “Warcraft” from director Duncan Jones.

“I think 2016 will be a turning point,” BoxOffice.com chief analyst Phil Contrino told TheWrap. In the case of “Creed” and “Warcraft,” he added, “I feel like they’ve hired the right people and cast the right stars.”