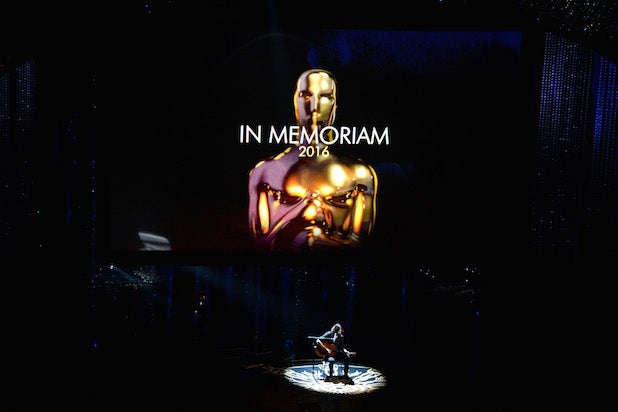 Bill Paxton, who died on Saturday at the age of 61, will probably be memorialized in some way at the Academy Awards on Sunday night.

But it’s a stretch to think that he’ll appear in the show’s In Memoriam segment, which in a typical year would have been completed weeks ago.

The Academy, which gives a list of names to include in the segment to the show’s producers, didn’t immediately respond to a request for comment. But typically, the segment consists of members of the film community who have died during the 12 months that begin on February 1 of the preceding year and end on January 31 of the year in which it is broadcast.

That deadline is occasionally broken: In 2014, writer-director Harold Ramis died the Monday of Oscar week, and was quickly added to In Memoriam. That same year, stagehand Sarah Jones, who was killed in an on-set accident about a week and a half before the ceremony, was memorialized in a card at the end of the segment.

And additions have been made to other Oscar film packages with even less notice. In 1998, director Chuck Workman prepared a montage of great Oscar moments for the 70th Academy Awards, and at the last minute he worked in a clip of Bart the Bear from the Saturday-night dress rehearsal for that show. The edit, which Workman did overnight after the rehearsal ended close to midnight, made it appear as if the montage included a moment from the show on which it was broadcast.

But the In Memoriam is not usually altered once the show is in the homestretch. Last year’s In Memoriam did not include Oscar-wining actor George Kennedy, who died the day of the show, or “To Kill a Mockingbird” author Harper Lee, who died 11 days before the Oscars. The latest death to be included was Pixar writer Daniel Gerson, who died on February 6 of that year.

Costume and production designer Patricia Norris, who died on February 20 of 2015, was not included in that year’s In Memoriam, but was included in 2016.

Paxton, of course, could be deemed an exception – but that call would have to be made by the Academy, not by show producers Michael De Luca and Jennifer Todd. And it would require changes in a number that has long been locked and set to music, making it likelier that Paxton will receive some kind of onstage shout-out, along with a spot in next year’s memoriam.

The memoriam page of the Academy’s website currently features the names of 100 members who have died in the last year. It includes a number of people likely to appear in the Oscars segment, among them directors Michael Cimino, Curtis Hanson and Arthur Hiller, and actors Patty Duke, Carrie Fisher, John Hurt, George Kennedy, Mary Tyler Moore, Debbie Reynolds and Gene Wilder.