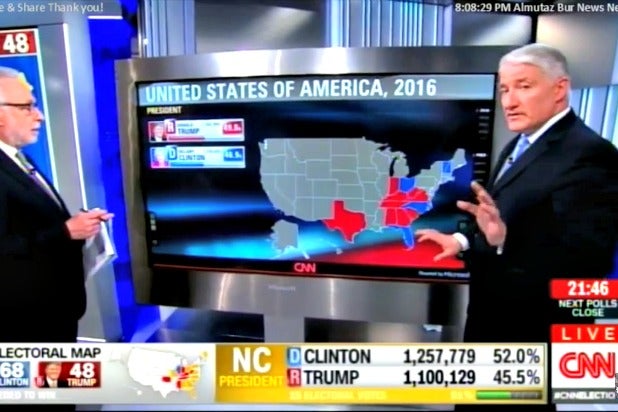 The excitement of election night might have been a little too much for CNN’s Wolf Blitzer.

The veteran host was busy overseeing voting results Tuesday in the cable network’s live coverage, often appearing alongside analyst John King at the “Magic Wall,” the map where King examines returns in real time. But many viewers noticed that Blitzer could not help interrupting or rushing King throughout the night, as the race seesawed between Donald Trump and Hillary Clinton.

“I think Wolf Blitzer is starting to have a nervous breakdown,” @realjunsonchan wrote on Twitter. “He’s demanding and barking orders @ poor John King.”

“Wolf Blitzer talks to John King the way I talk to a telemarketer,” another user wrote. And then this from another Twitter writer: “Can #wolfblitzer shut up and let #JohnKing talk!!”

Check out some of the best reactions below:

The real winner tonight is John King for having the restraint to not smack Wolf Blitzer. #CNNElection #ElectionNight

Not sure what is more interesting…the election or when John king will punch Wolf Blitzer in the mouth. Stop interrupting him!

Over/under 99.5 times Wolf Blitzer is going to interrupt John King for the rest of this broadcast.

Wolf Blitzer out here cutting John King off every 10 seconds. He might snap by the end of the night